To some, Passover might mean long seders and matztapation (I thought I made that up, but apparently not.) But bring on the boils, ’cause this Yenta only cares about one thing: It’s parody season!

First, those nice yeshiva boys Six 13 with the lovely a cappella skillz trotted out their version a few weeks ago.The breakdown of the plagues is super clever, and how rad is that matzah beach ball?

Then the boyz at Aish HaTorah slid in with their sizzling historical adaptation. Honestly, is there anything hotter than breakdancing tzitzit? Also, now I want a limo driver named Yankele.

So which one’s your favorite? Plenty of time to stew on it. Speaking of which, try the stewed apricots for that matzapation.

This week in the Civil Society Column:

THE RENOVATION of Savannah’s only Jewish museum holds important implications for all of us, even if you don’t know a knish from a kishke.

Listen, dahlink, this isn’t about theology or politics. And I’m not here to debate whether “Jewish” means a religion or an ethnicity or a secret ingredient that imbues regular chicken soup with magical powers. (My perspective continues to vary between a.) All of the above, but not all of the time b.) It depends; who wants to know? and c.) Oy, can we eat already? Pass the salt.)

Above all else, Judaism is a story, an epic tale that has survived pharaohs, pogroms and Hitler’s unspeakable evils, one intertwined with Western civilization. The tiny chapter written by Savannah’s Jewish community is not only unique, it’s essential to this city’s history—and its future.

It starts in July 1733 with Gen. James Oglethorpe, three months into his colonial experiment on Yamacraw Bluff. The good general had already lost a tenth of his troops to a mysterious marsh illness when the London-launched ship William and Sarah sailed up the river and requested amnesty.

On board were 41 Jewish pioneers, including Dr. Samuel Nunez Ribeiro, a descendant of Portuguese Jews expelled at the time of Christopher Columbus and forced to practice their traditions in secret. Dr. Nunez soothed those festering with fever and saved dozens of lives. Gen. O welcomed him and his band of freedom seekers as citizens of Savannah, granting them full rights and plots of land.

(Grateful as they must have been, you know somebody still kvetched, “We came across the ocean for this heat? And the bugs! What, we couldn’t find a nice place in New Amsterdam?”)

So right there, this act of tolerance and inclusion defined Savannah’s earliest days. Mickve Israel remains the third-oldest Jewish congregation in the United States.

“From the beginning, we were here,” reminds the timeline of the newly refurbished museum on the second floor of the Gothic synagogue on Monterey Square.

Indeed, American history is mirrored on every wall, from the portrait of Revolutionary War hero Mordecai Sheftall to the tasseled Chatham Artillery helmet worn by Chaplain Rabbi George Solomon. Original letters from George Washington, Thomas Jefferson and many more presidents congratulate the congregation on its major anniversaries—including one from President Obama on its 275th.

The installation also unblinkingly examines Jewish Savannahians’ roles on the losing side of the Civil War, documenting spy Eugenia Levy Phillips, whose sneaky efforts are credited towards the Confederate victory at Manassas. (Though being freed from Egypt is an important plot line in the Jewish story, some Southern scions ignored the cruel irony of owning slaves.)

The crown jewels of the permanent exhibit are its oldest: Two deerskin Torah scrolls that date back to the 1400s, gallantly protected through the tumult of the centuries and now professionally archived under bulletproof glass courtesy of North Carolina-based Studio Displays, Inc. One is still used on holy occasions, though thankfully the ancient circumcision kit is not.

“We have all of these wonderful artifacts, and I’m thrilled to see them displayed professionally,” says Jane Feiler, who with her husband, Ed, collaborated with the late David Byck, Jr. and architect Henry Levy on the original museum in the 1970s.

Already one of Georgia’s top Trip Advisor destinations, the upgrade was made possible by beloved local attorney Alan Gaynor, who passed in 2010. Member Greg Mafcher volunteered to manage the project, and committee members Toby Hollenberg, Eileen Lobel, Ellen Byck, Herbert and Teresa Victor, Jules and Phoebe Kerness and Rabbi Saul Rubin went through the 400+ items piece by piece, parsing the tsotchkes from the treasures.

“We didn’t throw anything away,” promises Toby. My bubbe—who escaped from Poland in the 1930s and saved every scrap of paper because “you never know”—would be very relieved.

But my bubbe would also be wringing her hands over the news right now. Anti-Semitic violence and vandalism has surged across Europe in the past year, from the massacre at a kosher supermarket in Paris to the shooting of a security guard at a synagogue in Copenhagen. Even as Pope Francis and French Prime Minister Manuel Valls condemn them, the alarming rash of attacks on Jewish people, businesses and synagogues continues. Writer Jeffrey Goldberg asked in The Atlantic last week if it’s time for Jews to leave Europe for good.

Here in America, the FBI reported in 2013 that 62 percent of anti-religious hate crimes target Jews. Every day I see Facebook acquaintances conflate their criticism of Israeli politics with prejudice and hatred. The vitriol has shaken my conviction humanity has learned its lessons from the Holocaust—which wiped out not only a third of the world’s Jewry but millions of Catholics, gays, disabled citizens and people of color barely 70 years ago.

Next week, Jewish and Christian families around the world will gather to celebrate Passover and Easter, each with its themes of renewal and freedom. My family has always encouraged a macabre sense of humor, and my brother broke us all up at last year’s seder table with a joking game of “Who Would Hide Us?” This year, it doesn’t seem so hilarious.

Perhaps when we open the door for the prophet Elijah, we will keep the door cracked to remind us of how many people in the world still need amnesty, and how lucky we are to live in a country where our rights were written in from the very beginning.

As Jewish history brims with tragedy at every turn, here in Savannah it is far outweighed by triumph. Curated on Monterey Square is not simply preservation of the past, but a hopeful testament for a future where diversity of all kinds is honored.

Savannah’s Jewish story is just one example of how the principles of tolerance, acceptance and inclusion beget strong communities.

If you believe those principles are the path to healing our city, our country and maybe even the whole wide world, then it’s your story, too. 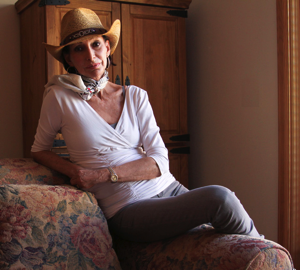 Her engrossing and entertaining fourth novel, The Blind Eye: A Sephardic Journey, has been chosen as the winner in the adult category for ONEBOOKAZ, which encourages all Arizonans to participate in one giant book club.

What this means is that basically, my mother is the Oprah of Arizona.

Anyone can download a free copy of The Blind Eye from March 14-June 1, and I look forward to the many discussions about the Jewish history of the Iberian Peninsula with my desert peeps!

(If anyone is wondering how my dear dad is spending his time these days, how do you think that video got posted? 🙂 )

Also, look for her new book, Paris Lamb, to be released this spring.

Purim commemorates Queen Esther’s badass rescue of the Jewish people from the conniving Haman, and somehow that’s become a fabulous excuse to dress up and drink.

I didn’t break out the turban this year and El Yenta Man didn’t come in drag, but hilarity still ruled as we groggered and grogged the night away.

I mean, when your rabbi pays homage to the late, great Leonard Nimoy while dressed as Gonzo from the Muppets, that is a party. 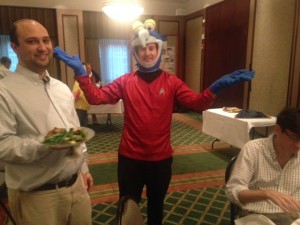 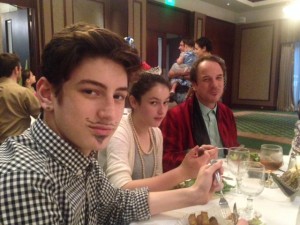 The addition of blanched green beans, however, greatly enhanced his look. 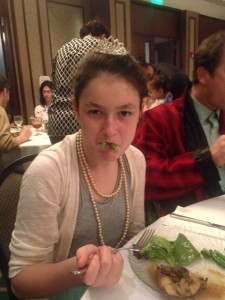 Some people think Purim is a children’s holiday, but that’s ridiculous. We’ll be dressing up long after the kids are grown, and I hope we look as good as the Hofsteins:

We missed the kid version of the Purim shpiel Sunday, so I was soooo glad Miss Piggy and Kermit reprised their roles:

El Yenta Man wishes I would bring the pink flask every time we go to synagogue. Yenta Princess does not approve. 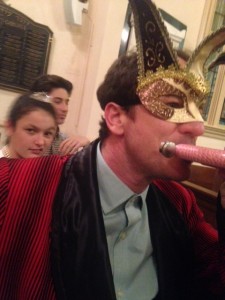 As he read from Mickve Israel’s 600+ year old Megillah — the oldest in the Western Hemisphere — Rabbi Gonzo reiterated that a warped sense of humor has been the key to Jewish survival for 6000 years. It sure isn’t because we blend.

Purim sameach and boundless silliness to all y’all!