Well, this is exciting! 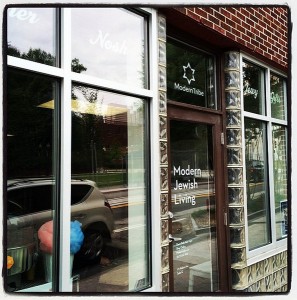 Those of you who live in areas of the country where you just pick up a new menorah or a kabbalah bracelet in between Pilates class and your morning latte, are like, yeah, *yawn*, whatevs.

But we who live in places where our sweet and well-meaning synagogue gift shops are the size of a bathroom stall, the idea of a WHOLE STORE OF JEWISH TSOTCHKES elicits a joyful dance that’s somewhere between twerking and the hora.

Shopping online is fine; it gets the job done. But I would have loved to see these gorgeous Jonathan Adler birds bowls that I bought for my Bro the Doc and his bride as a wedding gift before purchase–when I finally got to touch them in person, I was a little disappointed they didn’t hold more charoseth.

And I’d actually like to try on this adorable Candleschtick sweater to find out if it itches.

But this is the SOUTH, y’all, and Southern Jews accept that our storied history comes with certain limitations. We are so used to paying stupid money for the last box of Chanukah candles that we finding ourselves thanking the manager of Michael’s for designating an entire endcap to paper plates with dreidels on them. (I don’t know what Hobby Lobby’s got going on this year, and I don’t effin’ care.)

Sure, the Modern Tribe store is a four and half hour drive from me, but STILL, same state. Anyone up for a field trip? I’d drive, but the Absurdivan isn’t allowed to leave the city limits.

My children brought home some wonderful things from camp this summer: A tie-dyed challah cover. A swimming medal. A rock ‘n’ roll version of the Birkat Hamazon.

Of course, some of the things they brought home were not so wonderful, like moldy towels and a wicked case of athlete’s foot.

And then there’s this:

We were first introduced the last day of camp when my darling children that I hadn’t seen in three-and-a-half weeks threw their arms around my neck and told me how they’d missed me and how grateful they were for the experience of camp and someone needs to take the second session guinea pig home or he’ll die could we keep him please please please?

What can I say? They caught me off guard.

So that’s how the Yenta household added to its auspices—which already patronize the well-being of a diabetic pug that requires twice-daily insulin shots, four menopausal chickens, an aquarium containing three fish and a snail, a snake that makes an inordinate amount of noise, and four feral cats in the garage—a goddamn pet rodent.

If you’re not sure how I feel about rodents in my house, here’s what happened when a couple found their way into my pantry this summer.

And you probably already know that Guinea pigs are not even remotely related to pigs; they’re not even from West Africa. I don’t know what sicko decided to domesticate these little assholes, but I will tell you they are the most boring freaking pets on the planet (well, besides snails.)

Still, I indulged the children because I had missed them so. Also, it was too late since El Yenta Man had already named the guinea pig “Zeus” because he thought it was hilarious for a bunch of Jews to call out “Haaaay-Zeus!” every time this little varmint poked his nose out from his plastic cave.

It’s been three months that Zeus has lived with us and I’m about to lose my mind. First off, Yenta Girl’s room smells like a zoo. And the thing squeals like he’s being squeezed to death every time the dog walks by. Plus he’s gotten so spoiled from being fed fresh kale leaves I can feel him eyeballing me every time I make a salad.

I love my children, but if either of them ever tries to con me into adopting another thing that eats and poops they will be living in the garage with the cats.

Here is my point: Chanukah is coming. Would anyone like a free guinea pig? Otherwise, I may decide to use him to shut up the snake.