**WARNING: This post gets super personal in an Osmosis Jones kinda way.

This is El Yenta Man.

He’s quite a handsome devil, nu? Even though he leaves wet towels on the floor and still loads the dishwasher like a monkey after 16 years of marriage, I’d like to keep him around. Jewish husbands who can cook and like a zaftig tuchus are hard to find.

A couple of years ago during one of his regular man check-ups, his doctor found a lump on his prostate. (Past 40, us ladies get our boobies smashed for our yearly mammograms; the dudes get buggered with a rubber glove.)

As you can imagine, we were a bit alarmed. While a prostate is a useful piece of male anatomy that helps make the babies, much like its owners it can get increasingly irritating and enlarged as it ages. Often, as in one out of seven bodies, it can develop cancer.

Thankfully, prostate cancer is not life-threatening and easy to treat if caught early. Since it’s so common, it is a popular topic among dudes of a certain age, right behind Salma Hayek and whether goatees are still working if they’re gray.

But because El Yenta Man doesn’t do anything the normal way, his lump has to be different than all the other prostate lumps. His lump has to be special, not a regular tumor that doctors deal with decisively and swiftly and then everyone goes back to playing golf on their iPhones.

Nope, EYM’s lump had to develop within the walls of the actual gland, a condition so rare that there are only a handful of documented cases and no real treatment protocol. It’s official name is a Prostatic STUMP, as in a Stromal Tumor of Unknown Malignant Potential. Totally sounds like the RUOS in the Princess Bride, does it not?

We’re not real good at taking things seriously around the Yenta house, so we named it “Stumpy.” Of course, Stumpy the Tumor is as unwelcome a guest as a giant rat, and the extermination process is, well, radical. The problem with Stumpy is that he could get real troublesome real fast, or he might just hang out in EYM’s epithelial wall doing absolutely nothing forever. None of us want to play Russian Roulette with a quiet tumor, but since the surgery comes with risks of its own, EYM didn’t jump at going under the knife in such a sensitive area.

Thus began a journey to figure out whether–or when–to evict Stumpy. Feeling limited by the medical options in Savannah, EYM tracked down the No. 1 prostate expert in the country, Dr. Peter Scardino of Memorial Sloan Kettering Cancer Center in New York City. It just so happens that Dr. Scardino is a good ol’ Savannah boy himself, and EYM was able to score an appointment in Manhattan in the summer of 2012. In spite of all the hysterical opinions both professional and amateur regarding my husband’s prostate, Dr. Scardino calmly told us to “wait and watch.”

So we’ve waited, but it takes some complicated and expensive equipment to watch a prostate. Last week we flew back to NYC for some time with Dr. Scardino’s new MRI machine (much kinder and gentler than the previous model, which makes a vaginal ultrasound look like a freakin’ spa treatment.) When the digital photos came up, we were at that computer screen like it was the Game of Thrones finale.

Our first real look at Stumpy revealed that holy cow, he’s a lot bigger than we thought. I mean, you could see him quite clearly as the tech rolled the arrow around, hanging out right behind EYM’s bladder. But here’s the good news: He hasn’t changed much since the last time Dr. Scardino checked him out.

What that means is no surgery. For now, anyway. And another trip to NYC in a year. Which is actually pretty fabulous. Thanks, Stumpy.

But the prostate, it is no joke. If you’ve got one or you love one, go get it checked. 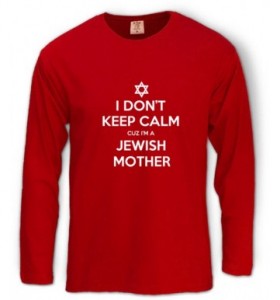 Look, I’m all about blasting the stereotypes about Jewish mothers, and I really don’t appreciate being called neurotic and overbearing and dammit if someone tells me to JUST RELAX one more damn time I’mma gonna slap…

Um, right. Carry on then.

Thank you to Tablet for posting this clip of actress/glamor elf Ginnifer Goodwin recounting to Jimmy Kimmel how her ketubah—the fancy Jewish wedding contract that basically says a husband can’t abandon his wife without shelling out some serious cash—was stolen then recovered the morning of her wedding:

I love this story for a few reasons. First, off my kids adore Godwin’s show Once Upon A Time and I can’t wait to tell them that Snow White is Jewish. That she married Prince Charming is extra adorable. Guessing sparrows and fairies bearing smoked herring will attend their child’s birth.

Second, that the rolled up piece of paper was found by people who could actually discern what it was clearly reflects a divine hand, no?

Lastly, l am no stranger to ketubah drama. On the morning of our wedding, as El Yenta Man and I were preparing ourselves to meet under the chuppah, the rabbi, who was no one’s favorite, decided he didn’t like the Hebrew lettering on it.

I was not present for the ensuing temper tantrum, but I heard murmuring that the rabbi was yelling at the top of his lungs ten minutes before the ceremony. On our honeymoon my new husband told me how our gorgeous wedding almost didn’t happen because the rabbi literally refused to sign the document that a Jewish artist friend had prepared for us. Apparently after a stern talking-to from my father, he made a big show about scribbling a “real” ketubah from a scrap from the recycling pile.

After the dizzy ride where I circled my groom seven times, I was a little confused as to why I had to sign the back of a flyer to the Sisterhood luncheon as well as the painting. But at that point I was so starry-eyed I would have signed my name in Sharpie on my dress.

All I know is the rabbi no longer shepherds that congregation. The ketubah still hangs over our bed.