Ooh, the ladies at the Senior Yenta lunch are going to be so envious of my new mah-jongg bracelet!

Exclusively Mah Jongg is selling them for $20, but I got mine for half that (’cause I have special Jewish mother bargain sniffing talents, yo.)

Maybe if I buy one for all of them they’ll finally teach me how to play.

I’m not going to be around much this week due to that crazy deadline thing that happens every month, but I must share the following tidbit from Friday night’s Tot Shabbat service:

While I marvel at the rabbi’s willingness to reach out to the kids and keep it modern, this conflicts with my own belief that synagogue needs to be a respite from the massive wave of materialism I fiercely defend my family against, especially that category known in our home by its scientific term, Cheap Sh*t From China. But thanks to our friends with whom we always spend Christmas Eve, El Yenta Boy has a Webkin. In fact, Santa brought it. So now my child is having existential angst as to whether his fluffy piece of crap manufactured by underpaid peasants is Jewish or not.

I started stewing in my pew a little bit as I am wont to do when self-righteousness gets the better of me, but I had to let it go when a little boy piped up from the back:

In spite of being a proud Person of the Book, I do not like to full price for them. But I was recently blessed to receive a gift card to Barnes & Noble and decided to splurge on an unthinkable luxury: A first edition hardcover.

It’s kind of a no-brainer that Geraldine Brooks‘ latest novel should receive the highest honor this Yenta can bestow: First of all, she won the Pulitzer Prize for March. And it’s got a Jewishy title and its on the NY Times bestseller list, which means there are people other than Jews are reading it. And it’s a thriller about books, which just appeals to my nerdy little heart.

The mystery surrounds the origin of one book in particular, the Sarajevo Haggadah, a real manuscript written in Spain in 1350. If you know a little about Sephardic history, you know Spain was not a great place to be a Jewish book, or a Jew for that matter, soon after that time, so the fact that the haggadah survived the raging fires of the Inquisition is a miracle in itself. The story of its survival – all true and documented – takes it from Spain to Italy to Austria and finally to Bosnia, where it was hidden from the Nazis by a Muslim librarian. It stayed in Sarajevo, and was brandished at a community seder in 1995 after the Bosnian government was accused of selling it to buy weapons.

Have I mentioned that this Haggadah is one of the few Jewish illuminated manuscripts in existence since Jews back then considered artistic representation of godly ideas to be idolatry? It’s simply stunning – just the pictures take my breath away.

But back to the novel on my nightstand. Over the course of its travels, the Haggadah came into contact with real people, and it is their stories that Brooks weaves together as the main character, Hannah Heath, an Aussie and professional book restorer, examines each hair, partial butterfly wing and wine stain for clues.

I’m no critic, thank goodness, because I might have to be more cynical about the absolute majesty of this story, kind of like Yvonne Zipp, writing for the Christian Science Monitor:

As the book goes further back in time, allowing for greater imaginative license, Brooks tries just a little too hard to build connections between religions. But that’s not to take away from her abilities. In the hands of a lesser writer, it’s easy to imagine the Haggadah having become a gilded Forrest Gump.

Feh, lady, life’s like an old Haggadah – everyone, if you go back far enough, eventually shares the same story.

I’m not finished with People of the Book yet, savoring each chapter because books this delicious don’t come along every day (certainly not brand new, with a book jacket.) But I’m recommending it to all of you anyway because I know you appreciate good fiction based on even better reality.

No denying it; Sid Caeser is (he’s frail and cranky as of two weeks ago, but still doing his double-talkin’) a comic genius.

This clip, starring the expressive Nanette Fabray, was shot live for Caesar’s 50’s variety show, meaning no editing, no second takes, no swearing – even today’s funniest Jews don’t hold a candle. TV today is such crap; remember when shows actually had people with talent instead of formulating the entire premise of the show on searching it out among a sea of amateur idiots?

I’m thinking of working on an updated version of Sid’s idea starring my bickering children to something noisy and tortured by Shostakovich.

Tu B’Shvat is comin’ y’all – time to plant something in honor of our wonderful friends, the trees.

I’m going to help my kindergarteners dig in the dirt, but for those of you who don’t like to get schmutzy, check out the Mitzvah Garden, available at PopJudaica.

Plus, 10% of of the $8.95 price tag benefits Hazon, “an organization whose mission it is to create a healthier and more sustainable Jewish community.”

And if even that’s too much, you can just wear these. 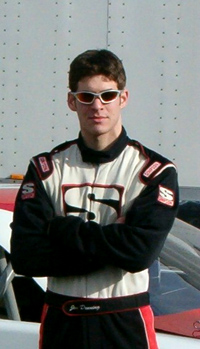 I’m not saying us Jews don’t love our sports, but there’s just something about watching dudes drive really fast in circles waiting for a big crash that’s just so … Daniel and the lion’s den. Besides, on what Talledega Night has there ever been a Mansichewitz emblem plastered on the hood of a Chevy?

Well, it turns out Manichewitz might have their day at the track: New Jersey mensch Jon Denning has a rising career in the Bud-soaked, church-heavy world of car-racing, and discusses his recent Birthright trip with JTA, as well as the perils of navigating Jesusland:

“‘Your luck would be better if you came to Jesus,” he said associates told him, suggesting that blown-out engines, flat tires and other failures would disappear once he converted.

But maybe if he wore tefillin while driving he could actually fly.

He’s still in the lower-level leagues, and doesn’t think NASCAR is in any hurry to welcome a Jewish driver into the uber-Christian upper ranks, but if all of us starting watching, and you know, called in all our favors with the media, we could move him up. What do you say – should we crack our Budweisers and bring some Torah to the pit?

*strictly for the goyim. It’s was my bubbe’s favorite phrase, so don’t come after me with your P.C. B.S.

You might think this blog would be the last thing that would receive compliments from the religion editor of a newspaper based in a city with more churches than gas stations, but Dana Clark Felty of the Savannah Morning News’ Faith Forward blog (scroll down) busts the Bible Belt wide open.

She called me a rock star, y’all. Love her. But hot damn, do I need new photos!

I have guilt – so what else is new, nu? – about missing Saturday’s Tot Shabbat at Temple Mickve Israel. We really should have been there – our favorite Jewish families attended and my son is always transfixed in the presence of an open Torah scroll. A good Jewish mother would have gotten everyone up and made the schlep to be there at 10:15am instead of putting Kiki’s Delivery Service on the DVD player and dozing on the couch until noon.

But here’s my rationalization: Every other day of the week, I perform a frantic dance of getting everyone dressed, breakfasted, inspected for boogers and out the door to somewhere. (Yes, including Sunday – even though I don’t have to wear eyeshadow and I get to act like a dork, teaching Shalom School is indeed work.) At last week’s Friday night Community Shabbaton, I noticed a distinct emphasis from the Conservative service about rest, the admonition to separate Shabbat from all the other days. If I had set my alarm, struggled with my contact lenses and screeched at my daughter to just hurry up and zip her gawdforsaken boots so I could drive downtown and speed around the squares, irritated that I couldn’t find a parking place thanks to all these f*n tourists, it would have violated the laws of Shabbat much more than making challah french toast, painting the girl’s toenails and staying in my pajamas until 2pm. According to the Mizvot According to Me, anyway.

In fact, being a DIY Jew for whom experience most always weighs out over rabbinical law, I’ve developed a whole Shabbos scale of personal kosherness for myself: Dishes, laundry and other housework are no-nos, as is doing any kind of work for money. I don’t shop for groceries or spend any money if I can help it, but I have been known to get a pedicure just to sit in the massage chair. And if you’ve been reading even for a little while, you’ve figured out that the Yenta don’t blog on Shabbos. Basically, if it feels like work, I abstain. And the reality is that on my one day off, getting farpitzed for synagogue and schmoozing feels like work.

I am conscious of separating Shabbat from the rest of the week – We light candles on Fridays and eat a leisurely meal, I spend time in nature, I put forth prayers of gratitude and lovingkindess for my loved ones and the world, I play board games and pretend beauty shop and bake with my kids. I always feel a little sadness when those three stars appear on Saturday night and I fire up the computer and put in a load of laundry, signifying the return to the breakneck speed of life. The best Shabbats are like this past one, when I do nothing but putz around the house with El Yenta Man and the kids, take the dog for a walk and spot a red-tailed hawk. And laugh a lot.

What sayeth y’all, readers? Is it more important to attend synagogue on Shabbat or to really, truly, deeply rest as we see fit?

We’re discussing Joseph and his fabulously colored coat in Shalom School, so here is the Yenta’s special kindergarten couture line, made for pennies with a few paper bags and a some tissue paper.

It was hilarious – I was like Tim Gunn on Project Runway: I don’t care if your gluestick is dry – make it work, people!

Our final runway show was a huge hit, and unlike on Project Runway or in Joseph’s family, no one got eliminated or thrown in a pit.

I know at least one single Jewish dude who will be tempted to use this on the passel of shiksa gelt-diggers trying to land him.

Dude, the hot blonde might be a lawyer, but even if this minty fresh spray came with a Yiddish dictionary, it ain’t gonna fool your mama.