Last Sunday, Young Yenta Man (*formerly Yenta Boy* I began this blog when he was four but he’s got this deep baritone voice now. How can I still call him a boy?) finally completed his mitzvah project. Around these parts, when a young person becomes a b’nai mitzvah, they are supposed to show their commitment to their community by raising money for a charity.

YYM’s bar mitzvah was way back in February, and homework and summer camp and general adolescent surliness postponed his fulfillment of the mitzvah, but I threatened to bury his iPad in the chicken coop unless he got his tushy in gear to get it done by the end of the Gregorian year.

It was worth the wait. He and his piano teacher came up with a playlist, and he performed a selection of classical ditties and some favorite songs that showed off that new baritone of his. Around 60 people came to Temple Mickve Israel to hear him, and over $700 was collected for the Hearts and Hands Clinic in Statesboro (founded by his bar mitzvah tutor, Andres Montes) and American Jewish World Service to aid victims of Typhoon Haiyan. (In his introduction, Rabbi Robert Haas called AJWS “the Jewish Peace Corps.”)

Apart from a few minor flubs and a small pre-show tsimmes that involved El Yenta Man giving up his socks because YYM chose to wear no-show athletic footies with his dress shoes, it really went beautifully.

Here’s to many hallelujahs, halos and imaginings for a spectacular 2014! 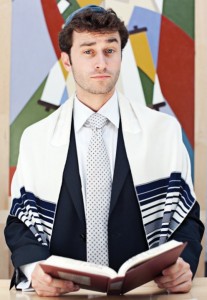 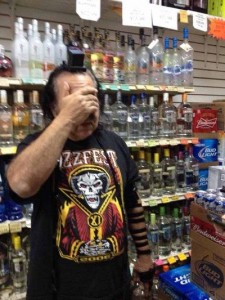 The interwebs are abuzzin’ with shock and disgust at Tila Tequila’s latest stab at famewhoredom, a ridiculously Photoshopped image of herself wearing a swastika armband and busting cleav’ while standing on the traintracks to Auschwitz.

No, I’m not EVEN going to post that trash. Here, go to Jezebel.com and get an eyeful and come right back.

Oh. You don’t even know who Tila Tequila is? Consider yourself blessed. Sorry about branding your brain with the horror.

Funny thing is, before she started calling herself “Hitila” (Hitler + Tequila = Instant Vomiting), the Singaporean non-talent told TMZ.com that she was converting to Judaism. No real coherent explanation on her illiterate blog of why in the last year she transformed from someone one who “just feels like the Jewish people have such a beautiful way about them” to spewing “GOD SEE’S YOU DIRTY FUCKING KIKES WORKING FOR THE SYNAGOGUE OF SATAN” but whatevs.

Frankly, I don’t have time for some mentally ill celebraho’s Jew-hating internet rantings ’cause I got my own anti-Semitic problems right here at home:

A couple of weeks ago, El Yenta Man went into the neighborhood bank where he’s done business since he opened up Strong Gym a few years ago to deposit some checks. I KNOW, he could just do it all automated and save time and hassle but he says he LIKES to talk to REAL people. Whaddya gonna do.

So he’s there, endorsing all the checks from his happy, strong sweaty clients, and one of the real people who works at the bank — one of the managers, in fact, a nice lady who always calls him “Mr. Strong” when he comes in — approaches him about how the bank could help set him up with a credit card machine so that his customers didn’t have to write checks.

EYM thanked her and explained that his business software had already set him him up just fine with a credit card account, but that his clients didn’t mind writing checks, and anyway, he preferred it since he didn’t have to incur the extra fees associated with swiping credit and debit cards.

She tried to sell him that the percentages were nominal; he countered that they add up over the course of a year.

Then she laughed like he’d just told the funniest joke and said, “Wow, you really are a Jew, aren’t you?”

When he recounted the story at the dinner table that evening, he told us that he was so shocked that for once, he didn’t have anything to say.

But the next week, when he went back in to deposit his checks, he calmly went to the woman’s desk and explained to her that what she said was inappropriate, rude and cause for him to take his business elsewhere. Surely, he said, he wasn’t the only small business owner concerned about his money. That probably every small business owner, regardless of their religion or ethnicity or marital status is concerned about their bottom line. And that singling out financial concern as a specifically Jewish trait is prejudice, even if she thought she was using it in a complimentary way.

Her reply? That she couldn’t possibly be prejudiced because, y’know, she’s black.

EYM tried again, using stereotypes about black people to illustrate how harmful and erroneous stereotypes can be. She stubbornly refused to acknowledge that lumping black people into one qualifiable group and her comment implying that Jews were thrifty were even related, because, y’know, that’s true about Jews.

Finally, he gave up and left. He’s thought about reporting her to regional manager, but this woman has probably been working at the bank for 20 years and is approaching retirement. Getting her fired won’t change her stupid, narrow mind, and EYM doesn’t want that on his head, anyway. He still hasn’t decided how to handle it; calling Human Resources to pay a visit to the branch might be a good place to start.

At least now he uses the drop box.

But if you think being Jewish in Savannah, GA is only occasionally disturbing, wait, there’s more:

One of my daughter’s friends has an older sister, a popular teenager with a new sassy haircut. On Halloween, her mother showed me a picture of Older Sis’ costume, in which she had styled her hair straight up like crewcut. And painted on a little smudge of a mustache. And put a swastika on an old green suit. Ta-Da! Sexy Hitler! So fun and edgy!

This time it was me who was shocked into silence. The questions I did NOT ask right then: How do you let your daughter out of the house dressed as the History’s Number One genocidal maniac? Does she understand how fully offensive it is not only to Jews but all sane people, and if she doesn’t, WHAT THE FUCK is wrong with her? And WHAT THE FUCK is wrong with all the people who saw this teenage girl out that night and didn’t read her the riot act?!

I hauled this around like a red hot iron for a couple of weeks until I spoke to the dad about it (they’re divorced.) He said he was appalled about it and that he had been out of town that night. He also explained that it’s been a hard year for both girls, and that even though it was a totally inexcusable choice of Halloween costume, maybe Older Sister’s judgment was skewed by the stress of the divorce. I said that of course I understood, though I suggested that perhaps some education might be in order. I would be happy to put together a little Powerpoint about concentration camps and six million European Jewish citizens wiped out in gas chambers.

EYM suggested the same when he talked with the mom, who said that she understood why we were upset but didn’t think we needed to provide any images or information that might make her daughter feel badly, considering the year she’s had.

I guess I get it? The kid is sad and acting out a little. Both parents are very likeable, liberal people. Maybe I’m just a little touchy about Hitler, having lost the entire maternal wing of my family in the Holocaust and all.

It’s been weeks and weeks now, and both of these situations don’t really feel done, but I don’t know what else to do. Neither is so much outright anti-Semitism as they are weirdly ignorant and disturbingly un-outrageous. The worst part is that EYM and I feel like we’re over-reacting, or at least, beating a dead horse on hopelessly apathetic ground.

See? It’s easy to be confrontational when it’s a stupid attention-seeking internet fameslut in a tinfoil dress. It’s different when it’s people in your own closeknit community with whom you do business and share carpool.

Tell me, Yenta friends, how would you handle these with compassion and lovingkindness while making the point that such words and actions are just not OK?