Straight from this week’s j. weekly: the Yenta’s interview with Allegra Goodman, author of three novels (including the newly-released “Intuition”) and tuchus-kicking Jewish mother:

Shes been called a prodigy by the Wall Street Journal. Time magazine compared her to Saul Bellow and Philip Roth. Undoubtedly, author Allegra Goodman is heading toward a permanent place in the American Jewish canon.

But perhaps her accolades are even more hard won than her predecessors, since Bellow and Roth never had to drive carpool. END_OF_DOCUMENT_TOKEN_TO_BE_REPLACED

This shayneh maideleh is Hayley Goldenberg, winner of the Jewish Princess Challenge.

Before you go all beserk, it wasn’t a contest to see who could whine the loudest or how much could be charged on a Visa in 15 minutes, but rather a unique form of tzedakah created by British Emunah that had the ladies traipsing all over the Negev while being sponsored by the folks back home. Read about their trials and tribulations…

I’m sorry I didn’t find out about this in order for us all to vote in American Idol-fashion for our favorite Jewess, but maybe a reality show next year?

Many condolences to Newsweek‘s Rabbi Marc Gellman, who suffered the loss of a family member this week, a sweet canine named Miles.

I was just thinking that it’s been two years since our beloved dog, Jasmine, exhaled with her distinctive snort for the last time. She was nine when we met, having been El Yenta Man’s constant companion since his freshman year at UGA, but she and I hit it off right away. Come to think of it, she was probably the reason I married El Yenta Man  I figured anyone who’d raised such a cool dog would make an excellent father.

She labored with me  with both kids  by getting into bed and pressing her furry back into mine for hours. Yeah, she had a tendency to fart and was an atrocious beggar, but anyone who knew her could tell you that Jasmine was some dog.

She was a seriously decrepit 16 (that’d be 112 in human years) when El Yenta Man had her euthanized. I would have liked to be there, to hold my husband’s hand as we felt her big rump go cold, but I had a three month-old infant and a toddler who was hysterical at the idea that his snuffly snuggle partner would never be coming back. (Remember Nanny the dog from Peter Pan? Jazz was like that.)

We have a little shrine in the living room to her with a giant photo my father took and the little box of her ashes. (One day, when we have a home of our own, we’ll plant a jasmine bush in soil mixed with the contents of that box.) We still read “Dog Heaven” by Cynthia Rylant on a regular basis. (We also maintain that she was the inspiration for “Walter the Farting Dog.”)

Sometimes, I swear I can hear her toenails clicking across the linoleum. After two years, the initial grief has been replaced with wistful nostalgia about the time she snatched a sandwich out of my mother-in-law’s hand when she turned away for a millisecond, but I still miss her.

If you’ve never owned a pet, you might think this all sounds irrational and weird. “It’s not like it was a person, for Pete’s sake! Get over it!”

But it’s a real and deep attachment, one that may enable us to feel compassion for all beings. So, say even if the horror happening in Sudan doesn’t inspire actual weeping, perhaps the space carved out by a beloved pet actual makes our hearts bigger. Rabbi Gellman writes in this week’s column,

“I cannot and will not feel embarrassed at feeling bereft because of the death of my dog. I know. I know that they are not on the same moral level, but I remain convinced that the ability to cry for one tutors the tears for the other.” 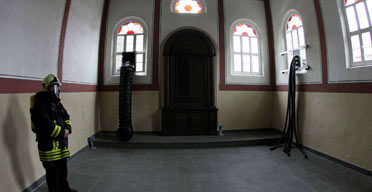 Santiago Sierra, a Spanish shock artist known for stunts raging from the provocative (tattooing the backsof drug addicts) and inane (reading from a phonebook for 120 consecutive hours) has created quite a stink with his latest artistic venture:

He’s taken over a former synagogue in Germany and filled it with poisonous fumes, creating a ersatz gas chamber where visitors don gas masks and take a guided tour.

When I first heard about this, I was fairly disgusted. I mean, can’t you imagine this pretentious attention-addicted narcissist sitting around in his cashmere underwear or whatever it is performance artists like to lounge around in when no one’s watching and thinking to himself “Hmm, no one’s looking at me. How can I top my starvation in a brick house project? What will upset people so much that my name, Santiago Sierra, will forever be associated in the public minds with the words ‘shocking!’ and ‘artistic!’ and ‘superfantastic!’? I know! I will piss off the Jews! They complain louder than anyone! Everyone will soon hear how controversial and provocative I am!”

Seriously, you can picture him on his real leopard skin couch smoking hand-rolled cloves, can’t you?

But Sierra (who is not Jewish) wrote in his artistic statement that rather than exploiting the Holocaust, he’s actually trying to honor the Jews murdered in the Shoah by countering the “trivialization of our memory of the Holocaust,” which I sort of understand.

Because our generation has heard so much about the atrocities of WWII and sometimes feel stifled by its enormity, we try to distance ourselves from it by placing a box around the Holocaust without truly exposing ourselves to its lingering grief and impact on the Jews and the rest of the world. Sierra’s protest is effective because making a gas chamber out of a synagogue bites us underneath our neat little mental games of avoidance and denial.

But mostly methinks he doth protest too much.

…so he’s gettin’ outta the kitchen:

Isaac Hayes, whose lounge act career was revived when he began playing the smoothest of all cafeteria employees on South Park in 1997, is leaving the show on the grounds that it offends his religious beliefs.

See, Hayes is a devout Scientologist. “Religious beliefs are sacred to people, and at all times should be respected and honored,” he told the AP. “As a civil rights activist of the past 40 years, I cannot support a show that disrespects those beliefs and practices.”

But, as South Park co-creator (and occasional Jewfro sporter) Matt Stone points out, “He has no problem  and he’s cashed plenty of checks  with our show making fun of Christians…He wants a different standard for religions other than his own, and to me, that is where intolerance and bigotry begin.”

That’s right  the reason we all love South Park is because those sick bastards are equal opportunity offenders (Mr. Hanky, anyone?)

I vote the voice of Howard Stern as Chef’s replacement; nothing offends him except TV executives and after last night’s Letterman stunt, he might be needing the work.

This hysterical parody is over 8 minutes long, so wait for your lunch break.

If this player doesn’t work, rip it out of the screen, beat the sh*it out of it, wrap it in duct tape with some bricks and throw it in a lake. Just kidding. You can watch it here on IFILM.

A big, sloppy “Yo” to the Bangitout Blog.

I had the strange pleasure of seeing Tedevan “Rocketman” Kurzweil making the rounds in San Francisco a few weeks ago, wearing a hand-painted sandwich board that read “6 foot 7 inch Jew will Freestyle Rap 4 You.” He piqued the interest of the j.’s editor enough to assign a story, and here it is!

We at the office thought him a bit of a whack job, because a Jew that tall with that much chutzpah ought to be playing basketball for Israel at the very least, instead of nudging strangers to heal their auras.

But y’know what? I’ve been checking him out a little more and he seems like a pretty cool guy. Even if he does smell like patchouli and feet. Giant feet.

I’m not saying I would let him couchsurf or anything, but if I see him hanging out in Dolores Park on a breezy day I might let him do a little reiki. In spite of his opposition to Israel’s security fence and admonitions from Palestinian artists, Pink Floyd bassist Roger Waters still plans to perform in Tel Aviv this summer.

Yeah, he cowrote “The Wall,” which has become the international anthem of breaking down barriers to oppression. The Union of Palestinian Artists finds this mighty hypocritical.

In a letter to Waters, the Union wrote, “How could an artist so closely identified with breaking down walls of injustice would cooperate with this monstrous wall that has been declared illegal by the International Court of Justice in The Hague?”

Waters, who has sympathized with the Palestinians over the repercussions of the fence, won’t punish his Israeli fans for it.

“I have many fans in Israel, many of whom refuse to serve in the military. I won’t cancel my trip to Israel because I don’t agree with the government’s policies, just as I won’t stop performing in Britain simply because I disagree with the policies of Tony Blair. People who live in Israel are human beings, just like everyone.”

Is it too opportunistic to say sitting on the fence never sounded so good?

A small but privately amusing coincidence that Aish’s latest one-minute movie is an animated version of last week’s j. joke.

It’s funnier with a soundtrack.