I promised you another coincidental Torah tale last week, and this yenta keeps her word. It’s a perfect story to honor all the soldiers who fought in WWII and veterans everywhere:

We have a Torah in the ark at Congregation Mickve Israel that comes from a trove of over 1500 scrolls recovered from Prague after WWII. Known as “The Holocaust Torahs,” they had been gathered up by Czech Jews as the Nazis made their horrific way across Europe and stored in a “museum” for the Germans. Most of those brave souls perished in Terezin and Auschwitz, but the Torahs survived and were moved to London in 1964.

From there the Holocaust Torahs have been distributed to synagogues around the globe as part of the Memorial Scrolls Trust — “on long term loan,” explains MI matriarch and mameleh Phoebe Kerness in an article she wrote for the temple newsletter. The communities they once belonged to destroyed forever, the scrolls were adopted by their new stewards “with the stipulation that they play a prominent and meaningful part in the religious and educational life of the institutions responsible for their safekeeping and condition.”

Our Torah comes from the little Bohemian town of Slany, about 12 miles northwest of Prague, and was scribed in 1890. Indeed, it has played a prominent and meaningful part of Jewish life in Savannah since it arrived in 1968: The Slany Torah is carried through the sanctuary and read from every Saturday. It’s recently been refurbished and re-koshered in Florida, thanks to the efforts Phoebe and her husband, Jules.

But it wasn’t until last summer that congregant Kerri Rosen actually asked, “Where is Slany, anyway?” 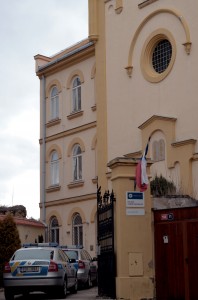 And thus began the adventure: Historian and Sunday School teacher supreme Teresa Victor found that the Jews of Slany has been expelled in 1458 but returned a few hundred years later to build a prominent synagogue in 1865. That part of Europe was never particularly friendly to our kind, and the population declined by 1930. In 1942, the remaining 81 Jews in Slany were rounded up for the camps. There are no Jews there today. The former synagogue now houses the police department.

Ms. Victor also discovered that in March 1945, the Eighth Air Force of the United States fought a bloody battle near Prague, bringing down a B-17 bomber over Slany and killing eight airmen. Here comes the meshuggeh part:

This plane came from a squadron known as “The Mighty Eighth,” founded in Savannah and referred to as “the greatest air armada in history.” The Eighth’s soldiers earned 17 Medals of Honor, 220 Distinguished Service Crosses, 850 Silver Stars, 7,000 Purple Hearts 46,000 Air Medals — and also suffered half of the entire casualty of the entire war. All were American heroes, and eight of them began their last journey from right here in Savannah, Georgia to die fighting in the town of Slany.

The temple contacted Mickve Israel bar mitzvah boy and former El Yenta Man compatriot Jeffrey Young, who defected from Savannah for Prague after college and has been living la vie bohème ever since. Young took the ten-minute trip to Slany and found the memorial built from the wreckage of the plane that reads “In memory of the crew of the American B-17 bomber shot down at this spot on 2 March 1945.”

The Slany memorial to the fallen soldiers of the Mighty Eighth Air Force, based out of Savannah, GA.

Our rabbi Robert Haas traveled there this summer to see it, and all of us are marveling at the serendipity: Savannah honors its Slany Torah, and Slany honors Savannah’s fallen soldiers.

This Saturday for Veterans Day weekend, Mickve Israel is holding a special Shabbat service at the sublime chapel at the Mighty Eighth Museum (which happens to be one of the most stupendous installations in the land.) The Slany Scroll will be there; reservations are required.

So how’s that for interconnectedness? Some may call it coincidence, others the work of the Divine. All I know is that the next time Little Yenta Girl is called up to undress the Slany Torah, her hands had better not be sticky.