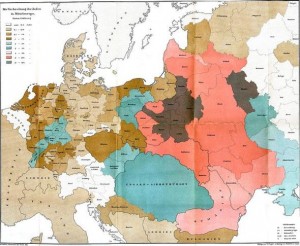 Oh, I am ALL OVER Bennett Muraskin’s Jewish Surnames Explained on Slate.com.

In it, he explains how the mass-naming of Eastern European Jews began under Joseph 11’s Austro-Hungarian Empire in 1787 “so that they could be taxed, drafted, and educated (in that order of importance.”

Before that, you were the “son of” or “daughter of,” so everyone in the shtetl knew whether you were the kid of the prosperous merchant or the village idiot and treat you accordingly. Besides providing more shekels for the Czar’s coffers and bodies for his army, the Great Naming of the 18th Century also gave Ashkenazic Jews—with our curly hair and funny noses—yet another characteristic that set us apart: Long mouthfuls of surnames that to this day, sound distinctively—and definitively—Jewish.

Muraskin masterfully breaks down the roots our Ashkenazic sobriquets by occupation, place, religious roles and other categories, including those totally misinterpreted by immigration officials over the centuries. It didn’t take me long to find my maiden name, Feinstein, among them: Someone up in my father’s family tree must have been a jeweler, though “Feldsher” might be more appropriate these days for our two generations of surgeons.

When I got married, I adopted my husband’s ethnically-mysterious “Lebos,” which alternately gets “So, what is that, Greek?” or becomes the Mexi-exotic “Lobos.” We’ve always batted around the theory that it somehow came from “Levi,” signifying ancestors with special roles in the ancient temple proceedings and making us feel doubly guilty for not attending enough Shabbat services.

But here I’ve just read under “other Hebrew- and Yiddish-derived names” that we could be perpetuating the line of Judah:

Lieb means “lion” in Yiddish. It is the root of many Ashkenazic last names, including Liebowitz, Lefkowitz, Lebush, and Leon. It is the Yiddish translation of the Hebrew word for lion — aryeh. The lion was the symbol of the tribe of Judah.

Judah was the meanie who suggested to his brothers that they sell their daddy’s favorite, Joseph, into slavery, but he also had a bunch of kids made from hearty stock (how else do you make your own tribe?) King David also descended from Judah, and thereby, apparently, Jesus.

Frankly, it confirms my suspicion that everything just comes back to Bob Marley. Iron like a Lion in Zion, indeed.