So a bit of excitement in our sleepy Southern hollow on Sunday: Club One hosted the one and only Sandra Bernhard, she of caustic wit and slicing profanity, a woman with so much sexy chutzpah that God gave her extra big lips which which to share it.

I’ve been a fan even before she starred as a psycho stalker in The King of Comedy in the early 80s…oh you don’t remember? Here:

So deliciously neurotic and amazing, nu? Both our dads were doctors in Scottsdale in the 80s, and my mother was always very impressed that Sandra got her manicurist’s license and did nails while she was trying to break into comedy. I assumed this was a backhanded way of telling me to quit brooding and smoking cigarettes like it was my job and actually get one.

Did you know Sandra could also sing? Listen to and love her soulful rendition “Midnight Train to Georgia.”

I’m pretty sure Sandra was not singing ANYTHING wonderful about gaddamn Georgia when she arrived in town late Saturday night and found that she had been booked into a crap hotel next to the bridge. Not befitting of a celebrity diva, indeed!

No wonder she pronounced Savannah “a total shitshow” in the first five minutes of her act. No one should take that personally, by the way, unless you work at the Sheraton Four Points on MLK Blvd.

Other than that, she seemed happy to be here, even if it was playing to a half-full room at 4 o’clock in the afternoon. I don’t know who thought the early bird dinner hour in the convalescent home was the best time to book someone as electrifying as Sandra, but I secretly enjoyed it because, ya know, it was a school night and all.

She riffed on feminism, skanky Miley Cyrus, being a gay mom and the inane injustice of reality TV (Best line: “There’s no room for talented people on television.”) Her impressions of other celebrities were dead-on — she’s got Patti Smith’s rugged cool down pat. Her performance style is so natural and fun, I felt like I was listened to my BFF regale me with details from Jane Fonda’s 75th birthday party.

She ended the show with an epic rendition of REO Speedwagon’s “I Can’t Fight This Feeling,” and then signed merch, as professional and accessible as an international superstar could possibly be.

By the way, Girlfriend is 50-fucking-7. Does she not look INCREDIBLE?

After the show, we kibbitzed with one of Savannah’s own loveliest ladies, Lisa K, as well as writer power couple T Cooper and Allison Glock, in town to write a travel piece about Savannah (I did my best to point them away from less shitshow aspects of the Hostess City.)

Then Bobby Z, an international supastar in his own right, invited us all out to an organic dinner (Sandra only does farm-to-table) and some dizzying rounds of Jewish geography.

But the height of the evening (for me, anyway) was when Sandra’s fabulous road manager Joe wondered aloud if anyone might be able to drive them back to the hotel.

“Why yes,” I said, kicking El Yenta Man under the table. “We’d be DELIGHTED.”

“Are you sure there’s room?” asked Joe, looking at me over the rims of his glasses and motioning to Mikey the piano player and the others.

El Yenta Man jingled the keys and we all walked down the quaint cobblestone street.

And then this happened: 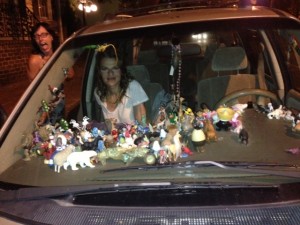 Yenta photobomb: Sandra Bernhard goes for a ride in the Absurdivan

I’m sure she’ll get those nice navy pants she was wearing drycleaned of diabetic pug hair. But I’m never vacuuming out the Absurdivan again.