So much is afoot, it’s hard to know where to begin.

The top news in Yentaland is the imminent launch of El Yenta Man’s gym and personal training studio, Strong: 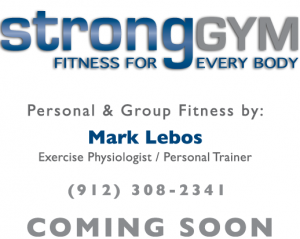 The place is coming together and the equipment is on the way, so Savannah better get its leg warmers and sweatbands on! Strong will offer one-on-one sessions, affordable group training, injury rehab and classes in a clean, well-lighted place. No drill sargeants, no techno soundtracks, just super-educated, experienced, compassionate trainers who can help everyone with a body become stronger, healthier and lighter. And yes, I’ll be teaching classes, too! Personally, I can’t wait to my tuchus on the new elliptical—EYM promises it’ll feel like I’m back climbing the hills of Marin County.

In other good new year news, my children are completely excited to get back to Shalom School. I found my first grader chanting the “V’havta” in the mirror this morning while brushing the snarls out of her hair, and when she got to the English, she stopped and looked at her reflection calmly and said “You shall love God with all your MIGHT, with all your STRENGTH, with all your BEING.” Our interpretation of Jewish teachings is that we are all Divine, and it was a really lovely moment to see my daughter connect spiritually with herself with a traditional prayer in an everyday setting.

The boy came home yesterday from Hebrew school all psyched about visiting Israel for his bar mitzvah (eliciting a small anxiety attack when I realized that it’s only two years away!) His teacher is this year’s shaliach, the Israeli emissary sponsored by the Jewish Federation. The shlichim that come here every year are phenomenally educated and enthusiastic, throwing themselves into the community to educate Jews and non-Jews about Israel’s history, culture and yes, its politics. Yenta Boy especially enjoys learning Hebrew from Gershon the Shaliach as well as Israel’s scientific accomplishments, and I think it’s important that Jewish kids know more about Israel than the conflict we see on the news.

Sheesh, it’s important for us to know more than that. I often encounter well-educated Jews who actively distance themselves from the Jewish state, some going so far protesting Israel as “apartheid.” Someone sent me a link to Peter Beinart’s May 2010 article, “The Failure of the Jewish American Establishment”, which describes how Zionism (the support of a Jewish state) is no longer an inspiration to anyone but the highly religious and the older generations and that American Jews are some of Israel’s biggest detractors.

I find this sad, of course, but potentially suicidal. Isn’t it possible to criticize Israel’s administration and mistakes and still stand with it, much as one can question the motives of the bloated corporate puppets we call U.S. Senators and still be a patriot? This notion among Jewish American liberals that “standing with Israel” means swallowing one’s outrage over the settlements, over humanitarian conditions in Gaza or obfuscating one’s compassion for all who suffer regardless of what side they’re on makes me think these people are reflexively attaching themselves to the underdog rather than considering the facts.

It’s a complicated situation, to understate it. Surely, racism exists in Israel, even among its leaders, and any kind of diplomacy is a challenge. But as a Jewish person on this planet with children, supporting the only democracy in the Middle East—with eyes wide open to its flawed, dynamic, very young existence —is in all of our best interest. And certainly not what Beinart calls “a moral abdication.”

So I’m grateful that my kids are able to learn about Israel from someone who calls it home, who’s served in its military and who I’ve only heard address the conflicts in a balanced, fair way. They’ll be able to shoulder the complexity of supporting Israel with pride—and with facts.

Sadly, actual facts are scare these days. Check out how much students know about the Middle East on the UCLA campus:

This one, if you can forgive the creepy panda bears and robot voices, speaks volumes about the misinformation about Israel that’s oozing around the world:

I’ve probably ripped open a can of nasty by addressing this here. I guess as American Jews we feel somehow responsible for the chaos “over there,” and by opposing Israel’s “right to exist” that somehow abdicates a person from the association. But the truth is that the world sees us and our children as Jews, like it or not. We should all be proud to stand strong with and stand up for Israel—even if we disagree with its actions.