Why is it that the people who do the New York Times crossword puzzle on a regular basis tend to be the smartest people I know?

They’re usually not that humble about it either, bragging over coffee that Tuesday’s puzzle was a breeze and they completed last Friday’s in under two hours. I forgive them their hubris because I tried a Monday puzzle once, got stuck after four minutes — word finds are more my speed, I guess.

So that explains why a big-brained friend had to alert me that last week’s Wednesday puzzle contained this clue at 51 down: “A digger of dirt.”

Apparently, the answer was “yenta.” Well. I am insulted as well as deeply humbled because I never would have figured that one out.

My mother-in-law was always a big crossworder, and when the dementia started to set in, she began doing four or five a day in the hopes that the stimulation would stave off the damage happening in her brain. Sadly, it wasn’t enough to keep her speech and memory intact.

But even as her mind has declined, she still does a crossword puzzle every day: She sits on the sofa for hours with two sheets of newspaper folded just so – one with the puzzle from the day before on top and the other with today’s puzzle, which has the answer key. It sometimes takes her the whole day to copy all the words from the back sheet to the front, which is great, because it really is the last remaining independent activity in her repertoire besides eating and bathing.

Sometimes when I peek over her shoulder, she tucks the answers away and smiles sheepishly as if she’s embarrassed; I know ten years ago she probably did Saturday NYT puzzles while calculating the taxes and planning the Sisterhood fundraiser. It makes me so sad to watch her with her brow furrowed, clutching a pencil that shakes as she scratches at the newsprint, yet somehow I feel so proud of her for fighting so hard to hang on to her legendary intelligence and cleverness, even if it is vestigial. 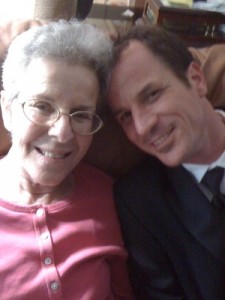 My MIL and El Yenta Man

4 thoughts on “Word Play Is Hard Work For Us All”