It’s Thursday, and for the past five years, that’s meant lunch with my mother-in-law.

I used to write about how we used to kibbitz with the seniors at the JEA—good times. Even as my MIL lost her ability to speak, then walk, then feed herself, we would still roll her up to our usual table and tuck in for some chicken and what was once broccoli. El Yenta Man would flirt with Beezy and the other ladies while I’d sneak into the kitchen to rummage for the Texas Pete’s. We’d take turns feeding Marcia and dabbing her chin. She’d developed a habit of leaning in her wheelchair, and one of us sat on either side of her to prop her up with a pillow. Sometimes she’d nod off before dessert.

A few months ago I came to suspect we were doing this more for ourselves than us. Marcia was well past expressing herself at this point, but one day I looked over and she just looked miserable. Maybe it was the broccoli, but I interpreted her furrowed brow and clenched fist as discomfort. El Yenta Man and I had always vowed to help her keep her dignity, and I realized that being fed in public—even among understanding, kind friends—wasn’t in keeping with that promise.

El Yenta Man used to meet me at the JEA from work, and it had also become too difficult for me to lift her in and out of the wheelchair by myself. I hate admitting that. I want to have unlimited strength and patience and good humor. Yet we all know that nothing, but nothing, in this life is unlimited. Except love. Of course.

So here’s a shoutout to my Senior Yentas—those bedazzled and hilarious women in their late 80’s and 90’s (!!) who guffaw over dirty jokes and squeeze my hand—Beezy and Anita and both Bernieces and Miz Dorothy and Lynn and especially Mickey, who likes to shriek “Gawddamit!” in a little girl’s squeal when there’s no Thousand Island. I miss y’all tons and promise to pop in sooner than later for a visit.

And a wink and an flash of my ankle to the men’s table—shrunk to no one the last time I was there: May you all rest in peace and joy.

And a deep bow of gratitude to the kind people at the JEA who set up the lovely tables and prepare the food: My partner in Texas Pete’s worship, the ebullient Marcia Silverman and her lovely daughters. Ben Bloom for revving up Bingo like nobody’s business. Adam and Lynn and all the rest of the Federation folks who keep that big, giant building churning with life. Thank you. 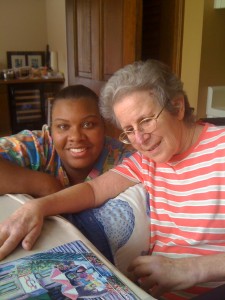 Now Thursday lunches are spent around my in-laws’ kitchen table. Sometimes El Yenta Man grabs takeout, sometimes we make bologna sandwiches on leftover challah from last Shabbat (yes, it’s a little stale, but we have survived dead broccoli, m’kay?) We kibbitz with Britannia, who’s been caring for Marcia on weekdays since she was still dancing in the aisles in the grocery store and singing to the moon. Britannia is part of the family now, and we sit and kvetch about our kids and our husbands while Marcia sips watered-down grape juice from a straw and looks at both us like she’s very glad she has no idea what we’re talking about. I took this photo this afternoon.

One day, maybe in a year, maybe in five, maybe even ten given Marcia’s relative good physical health and gentle stubbornness, I’ll have Thursdays free again. I would say I don’t know what I’ll do with myself but I’m pretty sure I know where I could volunteer my broccoli-steaming skills.

4 thoughts on “Thursdays with Marcia”