Last post I had to get all furtive about why I’ve been a slow Yenta because there was a VERY BIG SECRET at stake. You should know by now that beguilement is NOT my strong suit (unlike loquaciousness, kvetching and tailored linen in a size 6, which ARE my strong suits) and it was terribly difficult for me not to ruin everything.

See, my dad, also known here as Dr. Skip, was invited to San Francisco to accept the Humanitarian of the Year award from the American Osteopathic Association for his volunteer surgical work in Tanzania for the past four summers. (What, you need background information you say? Read one of my many posts on the subject. Even better, especially if you enjoy detailed descriptions of leprosy and goiters, is Dr. Skip’s blog.)

Humanitarian of the Year—kind of a big deal. So my mother thoughtfully decided that Dr. Skip should be surrounded by his entire family while accepting this award. Because she is a huge fan of suspense and drama, my mother also decided that the presence of me, El Yenta Man, the Yenta children, my Brother the Doctor and his Fabulous Flower-Named French Girlfriend should remain unknown to the Humanitarian of the Year until the last possible moment, so as to maximize the excitement of the occasion. 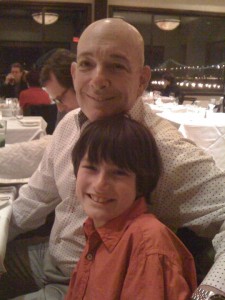 This plan was hatched back almost six months ago. That equals approximately a few hundred phone calls, emails and texts to my father in which I made NO MENTION of the fact that I would be seeing him in San Francisco in October. This was more challenging for me than it was for the children, who seemed to revel in the conspiracy and would say wistfully on the phone “I miss you SOOO much, Grandpa…I wish we could see you SOOOON. It’s no FAIR we won’t see you until DECEMBER…”

I couldn’t even update my Facebook page to let the West Coast peeps we’d be in town because even though Dad flicks around the social media neighborhoods about as often as El Yenta Man changes the toilet paper roll, he might’ve checked his FB page at the precise moment I made a reference to looking forward to Shabbos dinner in the redwoods, and then my mother would’ve written me out of the will. Counting down the last few weeks I pretty much had to stop speaking to him altogether because keeping the secret devolved my conversational skills into a series of excited cheeps.

Somehow, we all managed to keep our mouths shut and our electronic devices innocent and shlepped across the country last week. We spent a few days in our beloved town of Fairfax before heading to the city, where my mother had orchestrated the MOMENT at the lovely Waterfront restaurant on the Embarcadero. We gathered and turned to face him en masse as he walked up to the bar. Boy, was he surprised. And fortunately, did not have a heart attack. (I personally do not enjoy surprises like this, so if I ever win Best Jewish Mother Blogger in the Whole Wide World, please keep that in mind, Mom.)

We attended the award ceremony the next day, where Dr. Skip accepted a nice fat plaque in a roomful of his peers, successors and yes, his whole family. Unfortunately, my iPhone snaps look terrible but I’ll see if Bro the Doc caught some better ones. He kept his speech short and sweet, telling the other doctors that after a long career, they absolutely deserve a retirement of golf and leisure, but if they missed the adrenaline rush of caring for patients, there are a whole heck of a lot of organizations who’d be glad to accommodate them.

Serious kvells. How many kids and grandkids get to see the family patriarch recognized for service? Totally worth the jet lag.

Speaking of jet lag, Dr. Skip says he’ll be returning to Sumbawunga next summer, right on schedule. I don’t know how he and my mom find the energy to travel like they do—Las Vegas last week, San Francisco over the weekend—Crikey, just driving to Tybee for the weekend stresses me out, and I’ll probably be recovering from this cross country whirlwind for weeks.

And get this: Right before we all said our good-byes, Dad causally mentioned that he’ll be heading out this weekend for Washington, DC of Jon Stewart’s Rally to Restore Sanity and take photos for the Phoenix Jewish News!

This you call retirement, Dad? Maybe you’re not just a humanitarian but possibly part robot?

Oh and by the way: GO GIANTS!