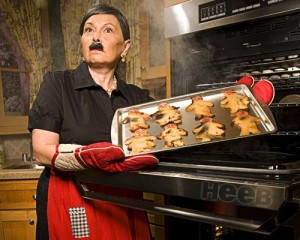 People are going totally batsh*t over the latest issue HEEB magazine, and they’ve got plenty of good reason:

You’ve got Roseanne Barr dressed up as a domestic goddess Hitler baking burnt gingerbread Jews, a recipe for German Chocolate Cake topped with broken shards made of sugar, and a feature extolling the wonders of Berlin as a vacation hotspot. My bubbie is spitting from her grave, I can tell you.

On one fingernail-chewed hand, I have to applaud HEEB for publishing a “Germany Issue” – it’s an “edgy” Jewish magazine, and the Holocaust is pretty much the end of the earth in terms of what’s acceptable satire. And if you’re gonna dive off that edge with both middle fingers blazing at your dead ancestors, you might as well do it right and get Roseanne Barr to put on a Fuhrer mustache. After all, this is a woman who did this to the national anthem – bringing down sacred cows is her specialty.

Then I read this (explanation? excuse?) from from HEEB’s publisher, Josh Neuman:

“When we depicted Sarah Silverman behind a hole in a sheet or Jonah Hill dressed as Moses holding two kegs as if they were tablets, we weren’t trying to be shocking—we were trying to communicate something truthful about contemporary Jewishness. Yes, that may sound impossibly high-fallutin, but it’s the truth and while we kind of don’t give a shit whether the magazine wreaks havoc on smug and sanctimonious visions of Jewish life, we do care when our intentions (or those of our collaborators) are distorted…Virtually every pitch we received leading up to the publishing of our Germany Issue circled back to the Nazis and the Holocaust and almost all of them were humorous in nature. Naturally, our editors couldn’t help but wonder whether something new was happening in the culture— whether the taboo against joking about the Holocaust and the Nazis exerted as much power as it used to. “

Neuman goes on to cite Curb Your Enthusiam and Seinfeld to support his claim that Holocaust humor is actually going mainstream – HEEB was just documenting a cultural trend. Fine. But “we weren’t trying to be shocking” comes across as such an obvious lie – the styling of the photo shoot is so over the top it just smacks of late-night editorial meetings fueled by Red Bull and vodka and adolescent one-up-manship: “Yeah, yeah, dude, then we’ll BURN the cookes! It’ll be SICK!”

The concept is clever enough – I get it. The problem is, it’s just not that funny. Hipster New York Jews in their 20’s and early 30’s lampooning the suffering of a generation that will never, ever find the humor in the Holocaust is the kind of sad joke mean high-schoolers play on the kid with autism who doesn’t understand the social rules: It’s not fair, and the only people laughing are the a**holes.

And now that HEEB has sacrificed this little lamb, I wonder where they’ve left to go?

3 thoughts on “So Funny I Forgot to Laugh?”