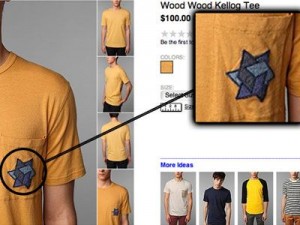 Last week the world went apesh*t over this t-shirt on the Urban Outfitters website, for damn good reason.

The Anti-Defamation League came out with its usual “strongly-worded” chastisement of any use of a six-pointed star that could be construed as offensive, demanding an immediate apology from the so-hip-it-hurts clothing purveyor. Considering last week was Yom Ha’Shoah (that’s Holocaust Remembrance Day for the rest of y’all), it was a prime time callout.

Urban Outfitters (heh, I was going to write UO, which so super close to OU, standing for the Orthodox Union that would certainly NOT place a kosher hecksher on this shirt, or on this blog, for that matter) has removed the shmatta from the site and replaced it with a plain yellow shirt of a similarly hideous hue.

The Danish designer of the shirt promises that the star wasn’t intended to evoke a anything about “judaism, nazism or the holocaust” (do they not use proper nouns in Denmark?) and that “the graphic came from working with patchwork and geometric patterns.”

The designer, Brian SS Jensen, who should really ditch those middle initials if he doesn’t want people to think he’s a Nazi, claims the shirt on the Urban Outfitters site was an early prototype and they were never actually for sale in the first place.

Fine, I believe you, UO and earnest Danish t-shirt person. You didn’t mean to be assh*oles by unwittingly marketing Holocaust swag to hipsters. Which leads us to the true outrage: Why in the world would a barf-colored t-shirt cost A HUNDRED DOLLARS?

Either its woven with tail hair from a unicorn or Mr. “SS” Jensen is raising funds in anticipation of more legal battles with the ADL.

6 thoughts on “Not-the-T-Shirt of the Week: Badge of Dishonor”