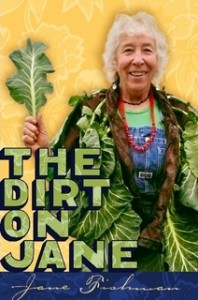 I want to be Jane Fishman when I grow up.

A few weeks back I had the delight of spending a morning with the writer and gardener known and loved around these parts for her funny, thoughtful prose in the Savannah Morning News and her whomping bi-yearly plant swaps, where last October I picked up some kind of overachieving looping-leafed lily that’s giving the fig ivy a run for space.

(Yes, we just missed the April swap, dangit. I must’ve been at a kid soccer game, or at synagogue, or most likely, digging around in my own cucumber seedlings and chasing the chickens away from the kale.)

Jane’s as hilarious and unpretentious as they come, cheerfully admitting to lackadaisical watering and writing habits. Still, she manages to grow a whole lot of food and flowers and a weekly column to boot, so she can’t possibly be as lazy as she claims. She also recently published a book, The Dirt on Jane, so actually, I’m not buying the slacker routine at all.

I first met Jane at synagogue probably 17 years ago, which she will tell you must have been some special occasion since she’s not much into organized religion. It was my first visit to Savannah to see the boy-who-would-become-my-husband’s hometown, and of course, the nice lady-who-would-become-my-mother-in-law wanted to show me the gorgeous historic temple where she served as a docent. For whatever reason, Jane attended the same Friday night service, and when my future MIL saw her at the kiddush, she insisted we be introduced because we had much in common since back then, as now, I was a newspaper columnist myself.

I wasn’t so young and arrogant that I couldn’t tell there was no way I was in this lady’s league, and I felt a little shy when I came face to face with that saucy smile and twinkling eyes.

She looked me up and down and said, “San Francisco, huh?” and then just laughed and patted me on the shoulder. We toasted bagels.

Years later, after my MIL got sick and it was time to move ourselves to the deep and dirty South to help, I consoled myself that any place where a Jewish pot-growing lesbian wrote for the daily paper couldn’t be too backwards. 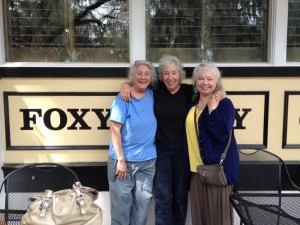 Ms. Jane was entertaining some out of town guests when I stopped by Foxy Loxy; that’s Jane in the middle, surrounded by old Arkansas pals Rae Hahn (left) and Elaine Burks. Foxy as the sign says, right?

It got funny fast. Rae, whose been a hippie longer than I’ve been alive and I am NOT so young, and Jane were batting old stories about living at the Eureka Springs, AK commune back and forth when I noticed Rae was wearing a chai.

“Many Jews in Arkansas?” I asked.

She rolled her eyes and said, “You know what the dental hygienist said about my necklace the other day? ‘What a cute little dog!’ Can you believe that?”

We all cracked up. A chai as a little dog? Only Jews could belly laugh over this. Then the subject of making homemade lox came up, and I was about to share my recipe when Rae interrupted with “First, you get a boat…”

More cackling. I wanted to go home with these women, but I had to get back to work. If I keep on writing and gardening and smoking a joint or two (btw, Happy 4/20, y’all!) maybe I’ll earn my place.

Before I left, Jane kindly signed a copy of her book, which I read over the weekend instead of turning the compost and thinning the beet seedlings.

Bearing a picture of the author as the Collard Green Queen wearing a boa of leafy greens, The Dirt on Jane is an “anti-memoir” about life in Savannah’s not-so-enviable neighborhoods and shlepping to Detroit to visit her ailing mother, who was deteriorating from dementia, much like my MIL is now. I shed tears over a few chapters, but mostly laughed and nodded my head, murmuring “Say it, sister.”

Buy it locally (at The Book Lady and E. Shaver’s Booksellers) or if you must, online.

Then, VOTE for it for “Best Local Book” in Connect’s Best of Savannah poll. (Do it, for me. I want to party with Jane at the awards ceremony.)

I never did get around to giving Rae my lox recipe, so here it is:

Cover a nice fillet of wild-caught salmon with two parts kosher salt, one part brown sugar and some chopped dill. Stick it in a plastic bag and chill it overnight in the fridge, maybe to the next afternoon. Rinse off and pat dry. Serve on bagels or eat forkfuls plain, depending on your munchie intensity.

One thought on “Getting Dirty with Jane”