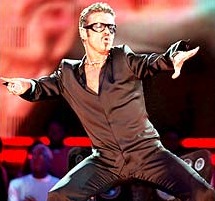 Sure, you’re thinking a guy who’s never been afraid to wear neon, want your sex, be your father figure or frequent skeevy men’s restrooms couldn’t possibly have any more secrets, but crooner George Michael has finally come clean: He’s a member of the tribe.

Naturally, it’s British sleuth Leslie Bunder of Something JewishUK and the super Jewtastic who tracked down the scoop. He met up with the Careless Whisperer at at a screening of the star’s autobiographical TV special, “A Different Story,”
and had the chutzpah to ask what everyone really wanted to know: Wasn’t it the other guy from Wham! who was Jewish?

Michael revealed in his chat that we had it all wrong; Andrew Ridgeley wasn’t the Jewish one. Michael told our man in London that he and his mother were Jewish but growing up “felt they had to keep it quiet especially after what happened with World War II.” He also said that one day “he would like to explore more of his Jewish roots.”

One thought on “George Michael Comes Out”