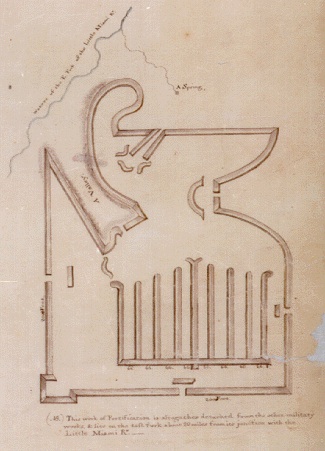 I read about Southern Ohio’s Newark Earthworks in a recent issue of Newsweek, and I was so curious about this massive network of geometric mounds built by ancient North American inhabitants known as the Hopewell People that I went a’Googling.

It seems the Hopewell People built dozens of large-scale earthen mounds from 100 BCE to 500 CE, long before that douche Christopher Columbus decided to claim these parts. Some of the mounds correspond to celestial events like the 18.6 year lunar cycle, certainly enough to establish the scientific intelligence of these ancient folks. But how do archaeologists explain this giant chanukiah, mapped near the East Fork of the Little Miami River in 1823 by the U.S. Corps of Army Engineers? I guess you could say it’s an explainable coincidence that native Americans constructed something that resembles a ritual tool used by people halfway around the world to commemorate the miracle of oil lasting eight days, but even the shape above the menorah is clearly an oil lamp. Spooky, right?

Read on, because it gets so much weirder: Two artifacts, known as the Decalogue and Keystone, were uncovered at the Newark Earthworks in 1860. The Decalogue is a stone inscribed on four sides with condensed version of the Ten Commandments written in “a peculiar form of post-Exilic square Hebrew letters” with a figure that can easily be identified as Moses. The Keystone has the phrases “Holy of Holies,” “King of the Earth,” “The Law of God,” and “The Word of God” written in a more recognizable form of Hebrew. A few years later, two more stones were found, then lost, suggesting a trove of mysterious Judaica in the mounds — or a giant hoax.

There’s an enduring “Lost Tribe of Israel” theory that there were Jewish people in American long before the first Jewish settlers were kicked out of Spain and Portugal. The Maccabee’s revolt and the rededication of the Temple in Jerusalem took place in second century BCE, so it’s entirely plausible these early Ohioans were refugees of the Jewish Diaspora who knew the story of the oil and the nine-armed menorah, who laid tefillin and valued the Torah.

But such bubbeminze is generally dismissed by scholars, Jewish and not. After all, how would they have made it from Jerusalem to Ohio in 100 BCE, after all? You think international travel is a pain in the tuchus now, those Jews would’ve had it way worse than stale peanuts and a $25 charge for an extra suitcase.

But why would have some guys in the 19th-century go through the trouble of cutting stone to make elaborate forgeries, and how would they have accessed arcane information about Second Temple practices? J. Huston McCullough, a professor at Ohio State University, lays out all the evidence and comes down on the side that the Newark artifacts — including stone bowls found with the Decalogue — are more than credible – read for yourself.

Perhaps the resistance to recognizing the presence of Jews in America before Jesus was even born is too frightening, not to mention daunting — that’d be a whole HELL of a lot of history to rewrite.

16 thoughts on “Digging in the (Internet) Dirt”