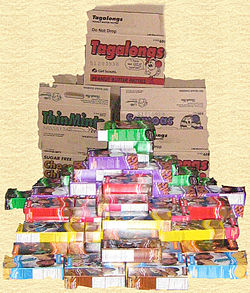 Wait, this isn’t a dream. It’s my livingroom.

The boxes that Little Yenta Girl sold for her Girl Scout troop have arrived, turning my house into an ersatz high-calorie warehouse. Now we have to separate them, deliver them and collect the money before people start banging on the door, hollering for their Thin Mints. This is all after spending several afternoons going to door-to-door to sell them six weeks ago with her grandpa, who has about as much patience for this as I do.

Don’t get me wrong, I love the Girl Scouts. I love sit-a-pons, I love the stinkin’ badges, I love LYG’s awesome troop leaders.

I also love the Girl Scouts’ fist-pumping feminist agenda, I love the social justice they teach, I love that they embrace transgender children. I wholly support this All-American organization of rational empowerment for young women.

(Yes, rational, not “radical,” as Indiana representative Bob Morris wrote in a laughably misinformed letter to his local paper this week, claiming that the Girl Scouts “sexualizes” young girls, and all its role models are feminists, lesbians and communists. While Morris is a ridiculous idiot, I do know some pretty freakin’ awesome feminist lesbian communists who have much to teach.)

The 100th anniversary of the Girl Scouts is this year, and many of you know that the Scouts were first started right here in Savannah, GA. A bright, feisty woman named Juliette Gordon Low (everyone called her “Daisy”) gathered together some neighborhood girls to get them involved in outdoor activities and expose them to business, art, science and social activism. Girls with disabilities were welcomed, and everyone was encouraged to learn skills of self-reliance and to contribute to the world.

(And, because the Yenta can suss out any yiddishe connection within two degrees of separation, you can see here that three of the first five Girl Scout leaders were Jewish.)

I think it’s safe to to say, Daisy was a feminist with an inclusive attitude for all.

Resourceful from the very start, the Girl Scouts began fundraising for charity and to provide camping experiences for their young charges. Cookies were an easy sell, and the first Girl Scout treats were first sold in Oklahoma in 1917 as a service project. The idea caught on fast (I mean, duh, cookies, hello) and demand grew to make these lil’ tasties into one of the most iconic fundraisers of all time. 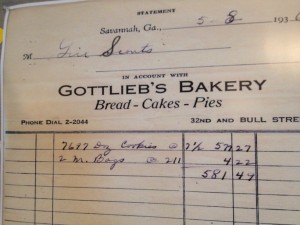 Back in Savannah, Gottlieb’s kosher bakery was a huge supplier of Girl Scout cookies, sold in wax paper bags for a quarter.

There are some amazing photos on display at Congregation Mickve Israel over the next few months, thanks for balabusta and former G.S. leader Carol Greenberg. She’s put together an incredible exhibit of historic uniforms, badges and more—call the temple for info if you’d like to visit.

So, yes, Girl Scout cookies. Deliciousness for a good cause. Happy to be a part of it all.

But sending the girls out into neighborhoods to collect orders in advance, then having to pick them all up and distribute them while being on the hook for the cash is just silly. I paid for my lunch yesterday using a cell phone, for heaven’s sake.

Surely after a hundred years, the smart and resourceful Girl Scouts can come up with a better way to hawk their wares?