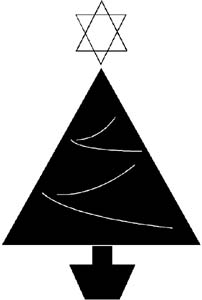 I must say I’m pleased with the rebellion against Christmas as the default wintertime holiday in this culture.

However, this Chrismukkah thing is sooo lame. I understand that interfaith families need support, but reindeer menorahs are just gross. And while its new kitschy, faux-Jewish-mother-voiced cookbook with recipes like Blintzen’s Blintzes and Fakakta Figgy Pudding might sound clever, it’ll only make for some damned confused kids who might grow up thinking the Maccabees defeated Jesus with some olive oil but he rose again so that the matzah didn’t have to  or somesuch bubbeminza.

And then there’s Festivus, touted as “the holiday for the rest of us” on an episode of Seinfeld in 1997 that now has at least dozens of people around the country airing their grievances and staring at undecorated poles. Of course it’s got a new book on the shelves, written by Allen Salkin with a foreword by Jerry Stiller, so thank the heavens someone’s profiting, baby!

(There’s a mildly entertaining VidLit for the book, but beware: my computer froze after tryng to load it several times.)

16 thoughts on “‘Tis The Season To Be Cynical”