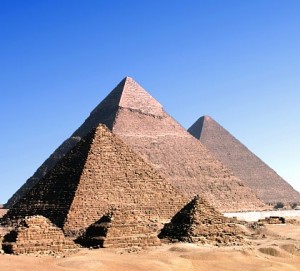 Anyone else received this in their inbox with the subject line “Fwd: To the Egyptian Rioters”?

Dear Egyptians: In the event of any damage or destruction of the pyramids, please note, we will not rebuild.
Sincerely, The Jews

I know, it’s funny. Maybe not in a guffawing, new Wayne’s World-kind of way, but it made me snort.

But a fellow chavurah listserver followed up the laugh with this thoughtful response:

I appreciate that Jews have used humor for decades as a way to cope with difficult situations. We make jokes to ease the tensions in our lives, for it is better to laugh at ourselves than to weep. But, this is not a joke in that tradition. This belittles the importance of the Egyptian struggle – a matter of freedom, of liberty and of life.
…
Pro-democracy demonstrators have been battling against government goons and, in the midst of all this, they put their safety on the line to protect artifacts of world history and heritage. The youth of Egypt linked arms to protect the National Museum from Mubarak’s security forces and thugs, who were ordered to create chaos and anarchy. The regime is trying to silence the people’s human right to peaceful protest and dissent. Pro-democracy activists have been attacked and silenced. They have been arrested and beaten up. They have been murdered.
…
We as Jews should support the rights and dignity of peoples throughout the world. We should not stand behind a dictator who has held on to power for over thirty years. We should not prop up a regime that arrests, imprisons and tortures political dissidents and journalists. We should support the voice of the Egyptian populace, which has come together from all walks of life to demand free and fair elections, a new constitution and regime change to lift the people out of poverty and into a brighter future. Egypt has lit a match out of darkness, will you blow out their light?

The writer, Andrea Guttin, is a Savannah-area lawyer and activist who brings a voice to those who can’t speak for themselves in our own country. She shared a couple of links about folks on the ground: OppressedCairo.com and an ABCNews link about her boyfriend, who rushed halfway around the world from Austin, TX to check on his grandmother hunkered down in her Cairo apartment hiding from the chaos.

I want to thank Andrea and these other writers for reminding me that a cheap laugh is sometimes at the expense of someone else’s dignity, and that as Jews, our support of the Egyptian people risking violence and death for their freedom is no fucking joke. The oppressed people of the world are standing up, toppling dictators and turning their brave faces towards a fairer, more just future. Even though this email isn’t in as poor taste as say, Groupon’s Tibet Superbowl ad, I think we can do better: 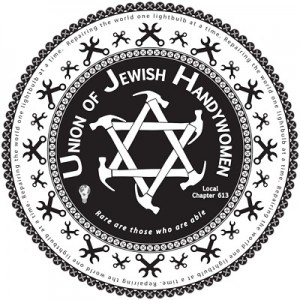 What would be more ironic AND socially-responsible is if a Jewish/Israeli task force were at the ready to help Egypt rebuild what has been destroyed in these last few weeks. May I suggest a uniform of t-shirts from JewnionLabel?