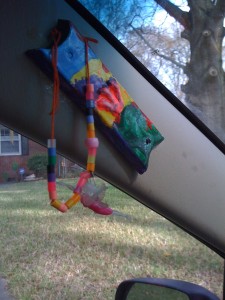 This time of year always exacerbates the sense of “otherness” that plagued me through childhood, then later fueled my adult sense of individuality. Nothing like being the one to start a rockin’ game of drunk dreidel at the office Christmas party to make a Jewish African Cowgirl feel like a STAR, right?

Though I spent plenty of high school Christmases feeling sorry for myself while sipping cocoa out of the Maltby’s vaunted Santa mugs, sometime around my early 20s I realized being a Jew at Christmastime was kind of fabulous — you can basically do whatever you want and there’s no expectations. These days, while I deeply respect my Christian friends’ traditions and beliefs, I definitely revel in feeling like an outlaw during holiday season with our five burning menorahs in the window and twinkly blue palm tree in the front yard (ironically, the only colored light display on the block. Go figure.)

My parents think the lights are a shanda, and frown on us when El Yenta Man and I drive the kids around to see the Christmas yard displays (we were VERY upset this week to see that the house that always exhibited a life-size nativity scene — including goats — had an empty yard and a For Sale sign. I never even got the chance to live out my Baby Jesusnapping fantasy.) Whatevs; I have a mezuzzah posted to the door of my minivan, y’all — clearly there are no sacred cows around here.

But suprisey suprise, we light candles far more Fridays than my folks did during my childhood, and I read and think and talk and write about Jewish things all day long. I like to characterize myself as a do-it-yourself Jew — I keep certain traditions but flaunt others, I teach Shalom School but my fourth grade son already reads Hebrew better than I do, I believe interfaith families can thrive just fine but think Chrismukkah is bullsh*t. Thankfully, I’m married to someone who lets me lead the way when it comes to how we practice Judaism at home. And make no mistake, this IS a Jewish home — even when we’re eating oysters.

Paradoxical and pariah-worthy? Definitely. A nightmare for the purists who think “picking piecemeal” is worse than no religion at all? Hells yeah. Yet in a world where assimilation and homogeneity are the biggest fears for the Jewish future, I’m quite proud of and secure in my Jewishness. So are my kids, in spite of the strange matter of Santa worming his chubby self into their imaginations (which I admit is totally my fault.)

In fact, the only times I don’t feel Jewish “enough” is around other Jews, particularly ones who are observant. This is rarely because these folks are judging me or arching eyebrows when I roll up on my bike to Shabbos lunch. In fact, some of the kindest and most generous folks I know in Savannah call themselves “frummies” and don’t leave the eruv on Saturdays.

It’s just that I’ve always held a belief that “more observant” means “more authentic,” and as someone who is more likely to paint the walls orange than kasher my kitchen, I’ve harbored something of an inferiority complex about it until recently.

When I first began writing this blog in 2004 (!) and began to find more on the Internet about Judaism than I ever learned at camp or synagogue from sites like MyJewishLearning.com and big kids on the Jewish bloggy block like Jewschool and My Urban Kvetch, I came to understand the embarrassing depth of my ignorance not just around Torah and halacha, but also about the Diaspora (Jews in Uganda what?), Israeli politics (HOW many parties at the Knesset?) and Old Country customs (Kapores. WTF?)

I’ve also come across weird Jews, kinky Jews and Jews who hate Israel. The more I seek, the more contradictions I find: Just this year, a Mormon Senator wrote a Chanukah song and a female African-American rabbi became the spiritual leader of the Reform temple in Greenville, North Carolina.

It seems that being a “real” Jew isn’t as simple as following 613 directions to the ‘t’ and circumcising one’s sons. So even though I mostly still feel like the fourth son in the Haggadah who’s too dull to know what question to ask, I’ve figured out than no one has any definitive answer to it anyway. Or rather, each of us do, and it’s up to any individual to discover what is true, what echoes off the walls of our own soul and connects us to the Most High.

Jay Michaelson, a Jewish writer and deep spiritual thinker who has no problem with paradoxes, wrote an interesting article on “The Myth of Authenticity” in yesterday’s Forward, elucidating far better than I ever could the inventions that cause us to feel “other” among one’s own people. If living according to God’s will is the goal, he writes, then “authenticity isn’t about form, it’s about getting to what matters.”

And the thing is, as Jews, what “matters” is different things to different people, whether it’s hitting the mikveh every week or saying b’racha before noshing on shrimp. Michaelson, who has likely struggled with outsider status himself as a gay man who has worked in religious environments over the years, presents a proverb for those not yet at peace with the ambiguity of Jewish identity: “Real Jews are the ones who make Judaism real for themselves.”

In the meantime, I feel as true a Jew as ever on this Christmas Eve. And I’m okay with that.

5 thoughts on “Musing on the Myth”