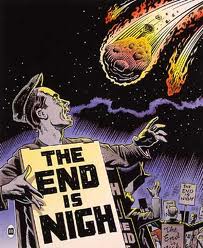 Christian evangelist Harold Camping has been warning us for months via billboard and a doozy of a PR campaign that “beyond the shadow of a doubt, May 21 will be the date of the Rapture and the day of judgment,” which I guess means I’ll be having a doozy of a garage sale with all the stuff my saved neighbors leave behind.

I’ve had a few decades to prepare since my first dry run as a Jew after the Rapture, but I hafta to say I’ll be super bummed if the world ends now ’cause damn, things are just starting to get good:

On Friday, Yenta Boy slayed the room at the Creative Coast’s awesome TEDx event with some piano and song—his version of Leonard Cohen’s “Hallelujah” always gets ’em. And no, I didn’t have to go all tiger mother on him to get him to practice. You can watch it here; his performance begins around 45:00. Please disregard weepy parents in the front row.

While I’m kvelling over the boy, this has been quite a year for Yenta Boy accolades: He won Live Oak Libraries’ county-wide poetry contest with a sonnet dedicated to his mother in the fall and made it to the state Social Studies fair finals with a project he co-created with his quirky friend Luke on—*ahem*—different religious predictions for the Apocalypse. Seriously, it’s like living with the lovechild of Elton John and David Koresh.

Yup, it’ll be a huge bummer if everything falls apart on Saturday since El Yenta Man’s Strong Gym is grooving along with new clients and a growing reputation for kicking tushy and putting broken people back together—already he’s musing that he needs more space. And Little Yenta Girl is apparently some kind of golf prodigy at seven years old, so it would be really great to have another ten years to see if my full-ride scholarship plans for her work out. I got the excellent news yesterday that an article I published in BUST magazine will be included in the new anthology, BUST’s DIY Guide To Life, but that will be rendered irrelevant if the four horsemen descend from the sky since the book doesn’t come out until October.

But hey—at least I get to enjoy THIS for the next few days: Thank you, thank you, thank you Connect Savannah readers for voting me Best Blogger 2011! It is an honor and a pleasure to inform and offend you. Though the fact that a weirdo Jewish mother from California can come out on top two years in a row in this town shows that the end of the world may indeed be nigh, after all.

Eh, I remember Y2K when we were all holed up with our case of tequila and El Yenta’s Man’s fishing gear. When all the computers did not, in fact, grow teeth and eat all the humans, we just woke up cold beside a foggy lake with bad hangovers. So I’m preparing for the best: That all of us will still be here next week, having to navigate life’s dumb challenges—and celebrating our victories.

But I got a sh*tton of margarita fixin’s, just in case.