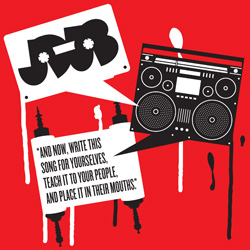 It was shock last week to read about the demise of JDub Records. I mean, this is the label responsible for launching Matisyahu into the limelight! And, of course, a major player in the resurgence of the “it’s-cool-to-be-a-quirky-Jew” movement that arose out of NYC around in the early Y2Ks. Sheesh, there were a heady few years there when Jewish pop culture went practically mainstream with Demi and Ashton rocking Kabbalah bracelets and little goyishe stoner kids in Kansas growing sidelocks.

The JDub boys were the machers (along with Jewcy.com and now out-of-print HEEB magazine) in the Jewisphere when I was a wee blogger back in 2004, feasting on the wackalicious sounds of Balkan Beat Box and of course, that Chasidic reggae rapper before he started selling out stadiums.

This was never anyone’s yiddishe mama’s Jewish music: JDub got behind punk rock klezmer with Golem, the Sephardic Judeo-Spanish fly stylings of DeLeon and seriously jamming Afro-Jewish fusion with Sway Machinery and made it COOL. They collected artists who cooked up traditional Jewish music with tablas and wicked beats and rap—which could have all been completely unlistenable or worse, embarrassing parodies. Instead, JDub gave hipsters permission to dance to the accordion.

Jacob Berkman’s Forward article provides a timeline of the fall of the label, which was seeded with money from Jewish philanthropy organizations. What’s really frustrating is that Nice Jewish Boys Aaron Bisman and Jacob Harris did everything a start-up non-profit should do, including switching up business models and diversifying funding sources, but they couldn’t make it work. And judging from Daniel Septimus’ op-ed earlier this week, Jewish philanthropy may be experiencing a shift from cultural projects like JDub and HEEB to those that provide a way to bring religious and ritual components back to the young people.

“We have moved from a moment when we thought there was a great deal of revival, and people seemed to be moving toward an interest in religion and religiosity. And that moment has passed, and now there is a shift back to the secular…Today, I think a lot of young people [in the JDub demographic] are those who have thrown off religion and not those who have taken it on. And that wasn’t true when JDub began. It suggests a new moment, and a moment I worry about.”

I posed the question to El Yenta Man. He rolled his eyes at me. “Being Jewish has never been cool.”

Right. I forgot. Well, now we can return to the fringe with our weird 12th century Kabbalah punk rock and obtuse senses of humor. And maybe, as Sarna admonishes, get our tushies back to synagogue.

You can still listen to the nachas-worthy artists of JDub at JDubrecords.org.

4 thoughts on “The End of An Aural Era”