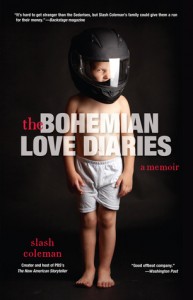 Listen, we all have our weird childhood stories.

The ones that we tell on the third or fourth date to gauge whether this relationship could get more serious, the tales of familial dysfunction that reveal our own inescapable flaws, those embarrassing yet vital moments in the formation of the imperfect, weird people we are now.

I personally could regale you for hours about my long lost Uncle Uriah, a sensitive, nature-loving soul that I never met but felt a great kinship with over our love of large trees and rescuing stray animals. I took great solace that there was at least one blood relative who could really understand me, and I wrote in my journal about the travels I would take one day to visit Uncle Uriah in the treehouse where he lived in the jungles Uruguay. That is until my dad confessed he had totally made up Uncle Uriah and that Jews did not live in treehouses in Uruguay. It took awhile to get over.

But I must say after reading storyteller Slash Coleman’s rollicking memoir The Bohemian Love Diaries, no meshuggeh childhood story beats the opening scene where the 7 year-old author watches his artist father, decked out in a Nazi soldier hat and a deerskin loincloth, chase a case of Schlitz through a meat market.

Full of such wackiness, soul-searching and some unorthodox questioning about Jewish identity, The Bohemian Love Diaries follows Slash’s evolution from a kid raised on the fringe of society to a successful — and searingly honest — mainstay in the NYC storytelling movement. His one-man show, The Neon Man and Me, received national acclaim and he’s a regular contributor to Psychologytoday.com.

Unafraid to improve his identity to suit his true self (the story of how he became “Slash” from “Jeffrey” is in the book) or to reveal the tender, painful scars left by his parents and lovers, Slash is an anti-hero for those of us who already know that growing up is complicated. Readers will chuckle as well as flinch a little at his self-deprecating travails; it also made this yenta just want to find this funny guy a nice Jewish girl.

Slash was kind enough to answer some questions for Yo, Yenta!:

Your journey to self-actualization has been a bumpy one. Do you think your book seems to say that after all, love is, finally, a relationship with the self?

Definitely. Though I think it needs an addendum: Love in all its forms — be it for family, for surfing, for French fries, for fashion, for art, for our dog, cat or goldfish, for our boyfriend/girlfriend/husband/wife —  finally, is a relationship with the self.

So, therapy vs. religion? In the absence of one, must we fill the void with the other?

Although I didn’t detail it in the book, Raleigh (my ex-wife) and I were sort of therapy and religion addicts. At our wedding we had a chuppa, a priestess, a reading by an OSHO devotee, a fire burner, and a Hindu God invocation. We were dressed in costumes that made us look like a cross between Greek Gods and velvet super heroes. Our need to include so many different things from so many different religions typified our relationship, it was a whole lot of good stuff that created a watered down version of good stuff that rendered each piece completely flavorless and useless.

That experience helped me see that there is a certain and necessary power of unyielding ritual in religion.

Raleigh and I tried the same thing with therapy, starting with one therapist the first year we met and bouncing to a new one each year. We tried every kind of whacked out west coast couples counseling that existed. When all was said and done, all the king’s horses and all the king’s men couldn’t keep our relationship together in the end. Religion and therapy failed us. This is why “tiger’s blood” and Ashton Kutcher movies are so important.

How has storytelling healed you? How does it heal others?

My father taught me that breathing and creating are the same thing. Upon waking, he’d drink a cup of coffee and then head into his art studio. I’d often head down later, after a bowl of cereal, but he wouldn’t eat until dinner time. It’s a schedule he maintains to this day. Having a safe space to create helped me learn a lot about escape. I’ve spent nearly all of professional artistic career — as a fiction writer, visual artist, jazz pianist, and performance artist  — using art to escape my circumstances.

No matter how bad my life was I could always disappear into an artistically created world — a world away from my father’s alcoholism and violence, a world away from the awkward anxiety and idiosyncratic behavior of a family full of Holocaust survivors, a world away from a place where I mostly felt like an outsider and freak who wanted nothing more than to feel close and connected to the people around me. Though none of these mediums gave me the results I sought, I never gave up my need to find a way to bridge this distance.

It wasn’t until I embraced performance storytelling and began to tell personal, true, stories that something began to change in myself and my work. Listeners no longer escaped through my art. They began to come closer and ask questions and connect with me by sharing their own personal, true stories.

Psychologists and neuroscientists explain this teller/listener relationship using simple biology — great stories trigger large doses of our bodies pleasure chemicals — oxytocin, dopamine and serotonin, the same chemicals released during a massage or falling in love. I liken the experience to the Na’vi tail from the movie Avatar. By literally plugging their tails (an overelaborate hair braid containing a highly evolved nervous system) into another creature’s nervous system, the Na’vi share an inexplicable bond in the same way the teller and the listener share a bond.

When we become immersed in a story, our brains essentially can’t tell the difference between the line where the story begins and our real-world experience ends. Very few things in life create such a similar bond. Healing is inevitable.

Your mother — a Holocaust survivor — kept anything smacking of Judaism out of your childhood out of (well-founded) fear. How does Judaism manifest in your life now?

My first completely Jewish solo show was called “Slash Coleman has Big Matzo Balls.” I performed it nationally in theaters from 2007-2008.

During the show, I played 15 different characters. I gave birth to a matzo ball, had sex with a Jewish Fairy Godmother, did a standup routine dressed as Jesus, and talked to a sock puppet named the Super Cock. It was Sarah Silverman meets Mel Brooks and as you can probably tell from the description it was totally over the top.

I managed to offend just about everyone. Many Jews said I didn’t have a right to tell the story because it didn’t belong to me. Christians threatened me. The reviewers ignored the content and used it as a launching pad to cut into who they thought I was as a person, saying I was a weirdo. Members of my synagogue dismissed my work saying, “He’s one of those (meaning a 2G – a second generation Holocaust survivor). Let him do what he wants.” My mom, who had spent a lifetime hiding her connection to anything Jewish, was suddenly being outed by her son in the most public of ways.

Through it, I learned a lot about my role as both an artist and a Jew.

Ultimately, that show was the first draft of “The Bohemian Love Dairies.” Without it, I wouldn’t have found the real story I wanted to tell. Without it, I would’ve never learned that I could tell that story without costumes and schtick. Sometimes, it takes peeling back many layers to get to the truth.

And so, this is how Judaism manifests in my life. On my sidewalk stage it happens regularly. Nearly every time I’m introduced to someone a conversation about my name ensues and a story about my grandfather and my Jewish past arise. Although I attend synagogue, I prefer to celebrate the holidays with my sometimes barefoot/sometimes naked Jewish friends and their gluten-free matzo balls —  my most satisfying Jewish experiences take place far away from anything called Jewish.

What qualities are you looking for in a lady in case I meet someone nice (Dude, the name says “Yenta” — what did you expect?)

Hey, I’m all about the yenta, sister. Bring it on!

First and foremost I’m looking for someone who understands that I’m way more than my public persona, be it in my books, my blog posts or my performances.  A lot of people who read my work and see me perform don’t understand that the guy called “Slash Coleman” is a public artistic creation. For every story I include, there are hundreds that I leave out. For every story I spin one way, I could have just as easily spun it in a different direction. My writing as well as the stories I perform are personal and true, but they’re created with literary craft elements in mind — I’m not.

So, female readers, if the list below resonates with you, feel free to contact my newly-appointed Yenta:

…you’re confident, kind, and you shine in your own very distinct way, maybe it’s through your kick-ass clothing ensemble or maybe you’re the creative one amongst all your normal friends, you’re definitely the one who sees the world a little bit differently.

…you’re a dreamer who wants to make a difference in the world, maybe you’ve found your mission (maybe you’re actively seeking it), you’re definitely playful, socially aware and exhibit kindness and generosity on a regular basis.

…. you’ve got a great reverence for ritual — be it personal or spiritual and have a belief in something other than yourself.

…. you think a relationship will enhance and expand your already rich life rather than fill an emptiness. And like me, when we’re sitting across from one another for the very first time you’d rather toast to our contentment in life than to our list of accomplishments.

One thought on “Slash Coleman talks ‘The Bohemian Love Diaries’”