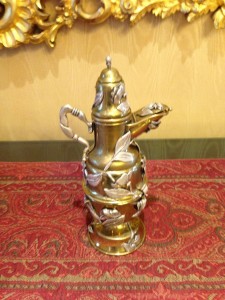 Ooooh, I love puzzles and mysteries! Especially Jewish ones, and I’m not talking about going into therapy.

Making the rounds this week on Reddit is this fabulous little teapot with all kinds of yiddishkeit tucked inside.

Look what happens when you take off the top: 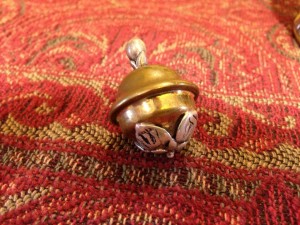 Then, a tiny but complete megillah, totally impossible read when you’re drunk on Purim but who cares?! 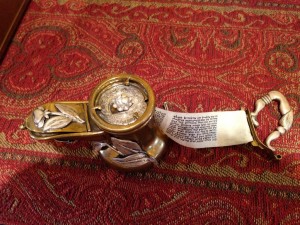 And what’s this, a precious pair of Shabbat candlesticks?

And, no, it cannot be, a MENORAH? It’s like M.C. Escher dropped acid with a rabbi!

There’s also an etrog holder, a place to light the ner tamid (eternal flame) and little kiddush cup – a portable synagogue for the displaced Jew.

It’s like having the entire holiday wheel in your pocket, so convenient when you’re being chased by Crusaders and anti-Semitic villagers wielding torches! One commenter called it “a Jewish version of a Swiss army knife,” but I like to think of it as the Pogrom Runner’s Leatherman Tool.

The owner of this amazing tea service says that it was a gift from his or her grandmother, and some have speculated that it was once owned by Sephardic conversos trying to escape the evil eye of the Spanish Inquisition.

However, Rabbi Fink of the Pacific Jewish Center writes that “there is no way this teapot dates back to the Inquisition.” He makes the point that in spite of what we learned in Sunday School, dreidels have only been around for a few hundred years, and “there is no tradition of dreidle among Sephardic Jews.”

That doesn’t diminish its value to art and history and plain old coolness. Perhaps ModernTribe.com will commission some fabulous contemporary design to display on our mantles and drop in our purses if — Heaven forbid — circumstances bring the necessity of fleeing in the future? Because, as every Jewish mother thinks in the back of her neurotic brain, you never know…

3 thoughts on “Secrets of a Jewish Teapot”