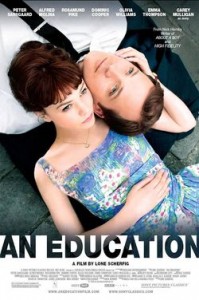 Looking at the main characters of this year’s Academy Award Best Picture nominees, you might think, “Hot damn, that’s a lot of Jews! Guess we really do run Hollywood!”

Never before has there been so many Jews onscreen all at once: You’ve got Peter Sarsgaard as the lecherous, Jewish real estate con man who seduces a 16 year-old girl in An Education, then there’s Michael Stuhlbarg as a neurotic, very unhappy Jew in the Coen Brothers’ A Serious Man, and of course, a whole host of brash young men thugging up Nazis in Quentin Tarantino’s gleefully violent Inglourious Basterds. Your bubbie couldn’t have imagined so many Semitic punims at the movies in her day — we should all be proud, right? Except that these characters aren’t exactly sympathetic — certainly not the nice Jewish boys your bubbie would like to see in a matinee where the dark-eyed hero marries the girl at shul and makes his mother happy.

Some folks have raised the question that there may be a kind of anti-Semitism inherent in these films that portray Jewish men as real shmucks — even if you cheered for the Basterds, you’ve got to admit they’re bloodthirsty sociopaths. Tom Tugend of the JTA wonders this week whether An Education and A Serious Man “represent either vile throwbacks to Jewish stereotypes in Nazi propaganda movies or creative works of art that show Jews, like other ethnicities, as multidimensional human beings,” and interviews several film and culture critics who speak to both sides of the debate.

Interestingly, Mr. Sparky Himself, Abe Foxman of The Anti-Defamation League, raised no objections to An Education, saying “there is nothing in the film to suggest that the main character represents Jews as a whole, or even some Jews.” (Although Foxy did take director Spike Lee to task for John Turturro’s sleazy club owner character in Mo’ Better Blues, released in 1990. Maybe my man Foxy’s gettin’ soft in his old age?)

Perhaps it’s because more Jewish characters are making their way into mainstream films that we can become more comfortable with the idea that they can be assh*oles. L.A. Times blogger Patrick Goldstein has no patience for “the hyper-sensitivity among Jews to any portrayal of a Jew that could possibly be viewed as a negative stereotype by the outside world,” a condition suffered by previous generations — with the good reason of a two thousand year history of hateful propaganda and pogroms, after all. It’s a very recent phenomenon that a Jew wouldn’t have to be defensive of a Jewish character who seduces underage girls or was psychotically violent.

I must disclaim here that I haven’t seen An Education or A Serious Man (I think there’s something super creepy about Peter Sarsgaard, and also with the exception of Raising Arizona, O Brother, Where Art Thou and The Big Lebowski, I find the Coen Brothers’ body of work immature and disturbing. I know, I know, I’m not cool) so I can’t weigh in on whether either or both films make me bristle in that way I get when people talk sh*t about Rahm Emanuel. But y’all know I love Inglourious Basterds, and didn’t mind at all seeing Jews exacting sick revenge — and as Goldstein points out, neither does anyone else.

Tugend asks Professor Howard Suber of the UCLA School of Theater, Film and Television whether he thinks this Oscar season’s unlikable Jews will lead to increased anti-Semitism, and Professor Suber balks: “That’s a simplified view of how people form attitudes … In reality, films in general reflect feelings and beliefs that already exist in a society. Movies are not very effective in changing people’s minds.”

I agree. I mean, if the ADL isn’t freakin’ out, then I guess all is well.

Now, with three out of the ten nominees dealing with Jewish characters and none of them win, that could be a slight. But whatevs — my money’s on Precious anyway.