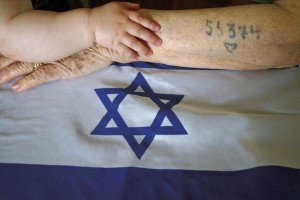 Sunday was Holocaust Rembrance Day, and the turnout was a standing-room only for Yom Ha’Shoah program at the JEA. Which means that the Holocaust is a bigger draw than a saltwater swimming pool and Zumba. But whatever.

Mayor Otis Johnson showed his support by showing up, and it was satisfying to see all the post-b’nai mitvah teens there, reading with appropriate solemnity the introductions of our handful of local survivors. It was a unifying moment for this community, each of the three strangely divided factions of Savannah’s Jewish world coming together for a rare moment of humility and prayer.

It went down a lot like the last two Yom Ha’Shoah services I’ve attended at the JEA: Short biographies spoken in hushed tones, a thought-provoking poem or performance, awards given out to the winners of the high school Holocaust writing contest held every year. Last year, the Israeli emissary, Maya, had all the children color butterflies and pasted them all over the auditorium to add an element of peace and hope to as we honored the six million, which was lovely.

Things took a darker turn this year, however, when the guest speaker, Joseph Wyant, took the stage. Mr. Wyant isn’t Jewish, but he was a young American soldier sent to Dachau the day after the Allies defeated the Nazi’s in early May, 1945. He sat off to right of the podium while his middle-aged daughter read from a letter than he had written to his own father describing what he saw at the Nazis’ largest concentration camp. In his early 20s at the time, this soldier put pen to paper about the stench of the bodies, the desperation of the barely-alive “skeletons with skin,” the horrific machinations of a system designed to work people until their living conditions and lack of nourishment rendered them useless, then exterminate them and burn their bodies without a trace.

There were no butterflies or “Life Is Beautiful” moments here — just a graphic story of Nazi ugliness and a nation who let it happen right under their noses. In his letter, he questioned how the Germans and Poles who lived around these camps — and there were hundreds — could have been ignorant to what was transpiring every day. The young soldier Wyant reported every detail with a clear-eyed compassion, understanding that by witnessing the mess, he was charged with telling the world what happened here.

The letter went on and on — people began to squirm, some of the young children had to be taken out. Wyant’s daughter finally looked up apologetically, saying “There’s still another page and half…if you want I can just take questions…” but the crowd encouraged her to finish. When she did, there was a standing ovation. I found out later that Wyant himself was supposed to speak for a few minutes, but his daughter had called that morning and said that he had Alzheimer’s, and this was shaping up to be a particularly bad day. She had wondered if it would suffice to read the letter — which until now had never been read in public or posted for view. We’re all hoping the family will agree to publish it on the Yad Vashem web site so that future generations can read Wyant’s courageous account of what he found at Dachau.

It’s these stories that give meaning to “Never Forget,” a phrase that’s drummed into our little Jewish heads so hard and so often that it literally becomes uncool to treat it with honor. Except in less than ten years those who survived the Holocaust and those who were eyewitness will be gone, and unless the hipsters take their legacy into their own hands, people will forget. And if they do, another sociopathic anti-Semite will convince the world it’s okay to do horrific things.

To those survivors, who smelled the stench, whose bodies and souls starved, whose families were murdered in front of their eyes and yet managed to not only make new lives but create new Jewish families, to rebuild our peoplehood into something strong and mighty and still loving in spite of it all, I make you a promise: I won’t forget. And my kids won’t forget either — I will drum this message into their little Jewish heads with visits to the Holocaust museum and give them the tools to confront Holocaust deniers.

And if I may be so blessed with grandchildren, I hope to read them Mr. Wyant’s letter. Sure, they’ll squirm and think I’m uncool — but they will know who they are and what happened to one third of the Jewish people so, so long ago.

One thought on “Not Forgetting Means Showing Up”