Nachas Week continues here at Yenta Headquarters as two new CDs are featured in one post  let’s call these short reviews “nachitas,” my very own made-up Ladino-flavored expression meaning “a spicy little snack.” Because “nachas” always reminds me of “nachos,” so when you add a “nosh” with a bit of flair, it linguistically adds up to “nachitas,” see? Mmm, can you smell the zest? First on the plate is The Whole World Lit Up, the third album in three years from the bluesy-Jewsy, alt-rock quartet Blue Fringe. I’ve only heard the title singles from the previous two, My Awakening and 70 Faces, which couch spiritual lyrics in guitar and bass licks so rockin’ they belong on XM Ethel, so I can’t compare them to this latest effort. But I really don’t need to: The Whole World Lit Up kicks tuchus all on its own.

Musically speaking, these 20-something Yeshiva boys take that staid combo of modern rock, the guitar/bass/keyboard/perky persussion with vocal harmonies, and swirl it up with deep Jewish soul  like if Jacob Dylan had had bar mitzvah, maybe he’d be opening for them. (Actually, you can hear the Wallflowers and little of Counting Crows’ Adam Duritz in lead singer Dov Rosenblatt’s voice  no surprise that he cites them as influences.) Though the lyrics are undeniably Jewish, this is a band who fits right in with Coldplay and other pillars of mainstream mellow rock.

Most tracks combine English with Hebrew, flavoring certain traditional tunes like Rabbi Shlomo Carlbach’s “V’Shamru” and the “Birkat Kohanim” with what seems to be their signature hypnotic chord-layering. “Eshet Chayil” and “Listen to You” will provoke major head-bobbing, and the Beatles-inflected “Do You Realize?” may have you repeating its catchy wisdom like a mantra: do you realize that life goes fast/it’s hard to make the good things last/do you realize the sun don’t go down/it’s just an illusion caused by the world spinning ’round. The overall effect of The Whole World Lit Up” is a rich, Talmudic-influenced pop soundscape that will have even the most secular among us grooving hard. 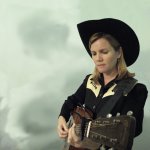 Mare Winningham is another addition to the growing group of artists who simply cannot be contained by the Jewish music genre. An Oscar-nominated actress (remember prissy Wendy from St. Elmo’s Fire?) and a convert to Judaism, Mare has declared herself the second Jewish country singer  after Kinky Friedman, of course.

But Kinky’s tunes are mostly twangy jingles that are more satire than substance, and Mare has waded into the much deeper waters of roots rock and American folk. Her first album, Refuge Rock Sublime, marries the minor chords of Eastern Europe with the fiddle-playing and banjo-picking of Appalacia, a combination that immediately engages anyone who digs sweet, down home music. The Jewish-country connection peaks right away in “Valley of the Dry Bones,” echoing mandolin giant David Grisman’s “Shalom Aleichem” in its quiet reverence.

Like so many converts who burn with a fever so much more intense than many born Jews, Mare’s passion for the faith comes through in her lyrics and her crystal clear tones. She’s taken the best parts of gospel music and made it definitively Jewish; one only need listen to “The World to Come” and “Al Kol Ele” to hear the words of the rabbis.

Maybe it’s the first forty years of Winningham’s life that give this album the kind of flavor you might find in a Southern Baptist church on a Sunday morning, but surely that’s the point: This is her own Jewish experience laid out, gospel influences and all. Even her tongue-in-cheek explanation of her late-in-life Jewishness, “A Convert Jig” (I will be a Jew like all of you/and never eat a pig), sounds hymnal. She’s taken a risk here, and pulls it off with a beautiful dignity. Though it may take time for Jewish listeners to “get” her, Mare Winningham will surely find her way to the top of the genre and beyond. And I’m not just saying that because I have an affection for Jewish cowgirlhood.