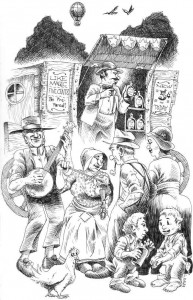 A few weeks back I was asked by the cool kids of Seersucker Live, Savannah’s no-pretension literary group, to write a little something based on the illustration at left. And read it. In front of people.

The event was “An Evening of Jazz to Benefit Adult Literacy sponsored by Royce Learning Center,” and the idea was that three literary people (me plus the very funny Joseph Schwartzburt and DEEP executive director Catherine Killingsworth) and our interpretations of this picture would be the warm-up act to Ricardo Ochoa and some seriously smokin’ gypsy jazz.

I had no idea what I was doing. Fortunately, Zach Powers provided whiskey backstage, so I didn’t care. Enjoy.

Far up into the mountains, in a tiny hamlet we would never remember the name of, back when families were close-knit by necessity and personal problems were handled without the benefit of clinical analysis or prescription medication, there was once a recipe for an elixir that could heal a fractured heart, rocket-jump a lazy intellect and vivificate a marriage gone inert.

It likely originated with a woman, a mother probably—a grandmother, actually. Already schooled in the medicinal uses of the plants growing up off the forest floor and forever encroaching on the homestead, she would have had a highly developed intuition that comes only with years of spending time among the leaves and flowers growing outside her door.

This woman would have had a specific condition to address, as hard mountain living rarely leaves spare time for random experimentation, invention only arising out of need. Maybe she had a daughter rendered catatonic by the loss of a lover or a neighbor’s son who spent too much time dozing behind the barn; perhaps her aim was to spice up her own husband’s ardor after decades of waning. Whatever the case, a cure for any lassitude was probably motivated as much by compassion as the strong urge to get everybody back to work.

She must have foraged for the herbs known to energize, like ginseng, a five-leaved low-growing shrub known in those parts as “sang,” as well as the ones to have a swirling, enervating effect on the libido and the part of the mind that governs it, maybe damiana, with its pretty white flowers. To improve a mood and activate brain power, perhaps she plucked a few passionflowers off the vine strangling an abandoned outhouse.

Once she settled on a prescriptive combination, she would have had to cure them in some type of fermented grain. Magical tinctures always, inevitably, involve alcohol. It draws out the medicine and preserves it, allowing the messy lumps of foliage to be thrown away, the essence retained in a clear, smooth medium. Of course, alcohol unarguably contributes to the medicinal quality of the recipe itself.

Our mountain grandma would have stuffed the picked plants into earthenware jars, poured moonshine over them, sealed them up tight and left them in a dark corner for a few weeks to steep. (Where she obtained the moonshine is a whole other story, but surely we can all agree that its fabrication arose out of a need to soften the edges of survival in the mountains.)

To cut the bitterness of the herbs and the eye-searing fumes of the hooch, she would have added precious honey bravely collected from hives overseen by protective stinging minions, not to mention possessive bears. If she was the kind of woman who believed medicine should be sweet since life was so bitter already—and don’t we think she was?—she would have added even more honey, and depending on the season and the generosity of the harvest, added ripe blueberries or blackberries or cherries or pears and let the flavors mix and mellow. Every few days, in between the weeding and cooking and scrubbing and tending and mending, she would shake the jars to make sure the magic was still awake and working, just like everyone else needed to be if they didn’t want to starve to death.

She did believe in a certain kind of magic, after all. Her father had taught her how to fiddle and she could work her way up to a sizzle on nights when the neighbors gathered with someone’s new barrel of fermented juniper berries and everyone forgot their age and their troubles and everything seemed downright immortal. Some kind of benevolent truth in the first silent snow. The clear voice that spoke through the flowers.

Finally, the jars would be decanted and drained into smaller bottles, a clear, amber liquid not as thick as syrup but glowing warmly in a ray of sunlight coming through a small window of a cabin built with logs felled less than a hundred yards away. Grandmother—who was probably not much older than me but stooped and gnarled by the work, the work!—would deliver her medicinal elixir to those in need, hopefully reserving a bottle or two to invigorate herself on long afternoons or before a barn dance.

If its recipients sat up and returned to their chores with a renewed energy, she’d become known in her parts—even famous—as a medicine woman, someone on whom a community would depend to get them through the toughest times in a hard life. Sometimes she’d get a dozen eggs in return for her talents, or a scarf knitted from wool spun from raggedy sheep, but rarely money.

Perhaps word spread even beyond the mountain about this particular batch, that it had a spark that spread from the belly to warm the heart and flood a bad mood with cheer, to lubricate aching joints and some swore, thickened thinning hair. Our mountain grandma would work to reproduce the recipe as best she could to keep up with demand, but the efficacy of the blend would vary, depending on the strength of the liquor and the potency of the herbs, which both have minds of their own.

Eventually collecting the plants and procuring the moonshine got to be too much for her old bones, and finally, her life of work and giving and getting through the day was over. Let’s imagine that she finally sat down in her favorite chair after the supper dishes had been cleaned, took a great big swig of her own elixir from a bottle she had stashed in her sewing basket, let out a cozy belch and fell fast asleep forever.

Since she didn’t write it down—never did learn how—the recipe for her marvelous remedy disappeared. They say you can’t miss what you never knew, but I can’t help feeling called to recreate a similar panacea. In this age when work means not so much physical labor but hours upon hours logged in front of a small electrical box, our wrists and shoulders tight from typing and our backsides and legs soft from disuse, our medicants for the accompanying ennui and sense of disconnection from the natural world only furthering a sense of anxiety we just can’t shake, I have long been fascinated with this imaginary mountain grandma and her simple medicinal wisdom for making life tolerable.

However, having been raised in a giant suburb where the only accessible flora was the pesticide-soaked turf of the golf course adjacent to my house, it’s been a challenge. My own grandmothers were good for costume jewelry and bawdy jokes, but I have not even a recipe for rugelach from either. Encyclopedic descriptions of plants copied from the little electric box aren’t real knowledge, and I can never seem to recognize anything from the photos with the forest floor in front of me.
So I go out seeking in the woods, touching this plant and that, smelling, tasting, until I understand that being outside is half the cure for any negative condition of the soul, that lying on a bed of pine needles and listening to the birds washes away discontent to reveal an allowing of life’s unfolding, even if it’s hard.

Still, I experiment with the plants, soaking out their medicine, tracking down artisanal honey and fresh, sweet berries. Though I may never get it right, I sense the root of grandmother’s recipe is doing it all with joy. And that the true effect of her magical elixir is, that with a sweet spark, is to remind the psyche what joy is so that it can perhaps reestablish its capacity to generate it on its own.

A little moonshine never hurts, either.