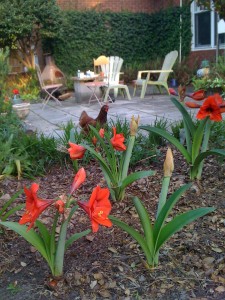 Whoa, it’s been a week of blessings at the Yenta house!

First, our efforts in backyardiculture are starting to show. A patch of aubergine-and-yellow irises threw out twenty blooms, followed closely by the dramatic scarlet trumpets of a dozen amaryllis bulbs — even the California poppies, which I planted in a fit of homesickness, are nodding their happy orange heads betwixt a passel of gladioli getting ready to riot. The tomato and squash plants have flowers, and a watermelon vine had just nudged its way out of the soil. Now, if I can keep the chickens from scratching everything up, we should have quite a bounty this summer. (And if I can’t — chicken soup.)

Next, our own El Yenta Man offers up his amazing and useful exercise tippage in the Savannah Morning News AND the latest issue of Savannah magazine. The SMN piece is accompanied with a video, so if you’ve never seen EYT in action, get ready for some hotness. (What? The piece is called “Hot N’ Healthy”! But ya know, he does look super in that yellow polo…)

Then, a trailer was released for “Mort,” a short film directed by Savannah College of Art & Design student David Davis, in which Yenta Boy has a small but important and rather creepy role as Death. The YBoy also starred in two more SCAD senior projects this spring but is currently taking an acting sabbatical to focus on the science fair and the horrific state of his room.

Yenta Girl had no publicity this week but remains the cutest and loudest child anyone has ever met. The pug had her first trip to the doggie spa, where enough hair was removed from her body to make a whole other dog.

Then there’s the Yenta. In addition to performing my spoken word ode to early motherhood, “One True Poem from a Housewife” this Sunday at the Sentient Bean as part of OUTLET magazine’s “Out Loud” Mother’s Day reading, I was just informed yesterday of some important news:

The readers of Connect Savannah voted me Best Local Blogger of 2010!

The link won’t be up ’til next week, but I can’t help but share. What’s super cool about this win is that I didn’t even nominate myself or anything – my dear local readers filled in my name of their own volition. Thank you, thank you, thank you! Be sure to tell me who you are next time you see me at the JEA all sweaty post-workout or in the Publix parking lot yelling at my children.

So much hullabaloo might inflate this family’s egos to the point of floating away, so we’re attending synagogue tonight to make sure everyone stays grounded (and so the old ladies can kvell over us.) As we roll back away from the sun for another Shabbat, I send up an extra strong blessing of gratitude in the form of our family’s favorite prayer, the Shehecheyanu. It’s usually for special occasions and holidays, but it just feels right tonight:

Blessed are You who has given us life, sustained us and allowed us to reach this season.

A flower-filled, peaceful and happy Shabbat to all!