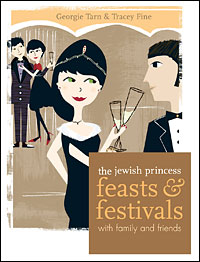 One of the perks of being a loudmouth Jewish blogger is that occasionally my opinions are solicited about a new product or book relating to our people. A few years back, the publicist for The Jewish Princess Cookbook contacted me to see if I’d like a review copy. I cringed immediately.

Listen, I’m not one to judge a book by its cover — or its title. But the term “Jewish Princess” stopped me cold. I don’t care how much you love Frank Zappa, it’s undeniably pejorative, attributing a superficiality and materialism to Jewish women, and I couldn’t believe that a publisher in the 21st-century would perpetuate such a negative stereotype. After checking the web site and finding sample recipes for inane things like “Grapefruit with Brown Sugar” and “Melon Balls in Champagne”, plus a lot of tired shtick springing from the old joke, “What does a Jewish princess make for dinner? Reservations!” I passed on reviewing it on my web site. Like my mother taught me; “If you can’t say anything nice…”

It turns out the bad jokes are on me. Authors Georgie Tarn and Tracey Fine not only embrace the Jewish Princess cliché, they are workin‘ it. That first cookbook was a bestseller in their native United Kingdom, and the British BFFs have appeared on TV and radio, lauding themselves as the “new ambassadors for Kosher cooking.” Seems that there are plenty of Jewish women out there who identify with their lavish lifestyles and simple kitchen tips, not to mention the interpretation of the laws of kashrut as the first “Diet Bible.”

So now Tarn and Fine have written a second cookbook, and I thought it only fair to take a closer look. Their latest endeavors at the stove are featured in The Jewish Princess Feast & Festivals, a collection of recipes for the major holidays and others simchas couched in the Princesses’ familiar saccharine humor. However, once you get past the references to plastic surgery and designer handbags (“What did the Jewish Princess say to her baby? Gucci, Gucci, Gucci!”) there happen to be a few useful dishes to incorporate into your homecooked menus.

Most of the recipes don’t require more than a handful of ingredients or more than a rudimentary knowledge of basic cooking skills. According to the authors, this is because Jewish Princesses don’t have much time to spend in the kitchen in between shopping and getting their nails done, but for those who have jobs or don’t necessarily enjoy spending the entire day making one meal, this works out for us, too.

For dairy ideas on Shavout, the “Vegetable Risotto” and “Spinach and Ricotta Tart” are quick, tasty main courses, and I’m looking forward to trying out the “Lemon-Chile Lamb Chops” on the grill during Sukkot. And though “Hosting a Designer Dinner Party” may not be anywhere close to the top of your agenda, the collection of canapés might prove useful at your next book club meeting.

So though I still find their concept offensive, I’m not one to turn down a decent kugel recipe. But that doesn’t mean I condone the Jewish Princess stereotype, nor do I plan to follow the Princesses into their quest for fame. Yes, it turns out the Princesses have penned a third book out this fall, The Jewish Princess Guide to Fabulosity, exploring topics like hairdressers and mother-in-laws.

Frankly, I don’t even want to know.

Wash the salmon well and place on a sheet of foil on a baking sheet.

Add the rest of the fish ingredients, then make a loose parcel with the foil to seal the fish. (Mine resembles a clutch bag, of course!)

Unwrap your parcel and remove the fish with a slotted spoon. Strain the stock and reserve for the sauce.

To make the sauce, mix the flour and water together in a bowl until smooth. Reserve.

In a saucepan over low to medium heat, slowly heat the crème fraiche. Add the 4 tablespoons of the strained stock, the lemon juice, dill and seasoning.

As the sauce begins to simmer, add the flour past, then turn down the heat and cook, stirring, for at least 1 minute.

Remove from heat, and serve the sauce with the fish.

The dish can be served hot or cold.

“Don’t forget to serve with a glass of Princess Pink Champagne. Lechayim!”

One thought on “Cookin’ With Clichés”