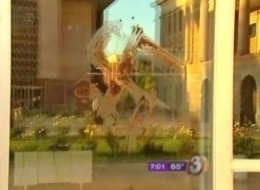 By now you’ve heard about Arizona’s new immigration law, a racially-bigoted, short-sighted solution to the challenge of border patrol and undocumented workers in this country.

Basically it’s become illegal to be brown my home state. Law enforcement now has the right to detain any person who looks “suspicious,” which could mean anything from ordering “dos cervezas” to spending a dangerous amount of time working on one’s tan laying out by the pool. It seems like everyone sane is in an uproar, and there’s reports of serious boycotts of Arizona and the divestment of any business transactions by two of the largest cities in California — a state that has an even bigger immigration issue than Arizona.

I remember the days when Douchebag Governor Evan Meacham canceled Martin Luther King Jr.’s birthday as a national holiday, and all I can say is that although there are many people (and views) that I love in Arizona, they’s some f*#@d up morons in charge over there. And I live in GEORGIA, where I’m almost positive that you actually have pass a f*#@d up moron test to qualify for public office.

The outrage has been rather heartening, though. And as much as I loathe it when exploited populations pull the Nazi card to vilify their oppressors, I have to say I adore the person who had the chutzpah to slap a swastika of refried beans on the window of the state Capitol.

If you missed The Daily Show‘s Wyatt Cenac riff on the new law, it’s worth a watch:

One thought on “Brown is the New Jew?”