It used to be enough for humans just to grow up, spawn and leave behind a good-looking corpse. But we’ve evolved into a bunch of overachievers, haven’t we? Keeping a catalog of all the things we must do before we expel our last breath or our lives will have been for naught. It’s not such a bad thing to have goals—like, one of these days I’ma gonna get around to finishing a real, live book—but some of us don’t need any more pressure, m’kay?

That’s why your Bucket List should always include a few things that overreach the boundaries of common sense (dressing up like a man and running with the bulls in Pamplona, Spain) and reality (performing an interpretive Afro-Judeo dance with Lady Gaga wearing my very own pair of prosthetic horns) as well some manageable things to achieve that feed the illusion that we’re actually in control of our own lives.

As it turns out, this past weekend was a bang-up weekend for crossing some things on my Bucket List, two of the easy variety and one bordering on the notsomuch commonsensical. 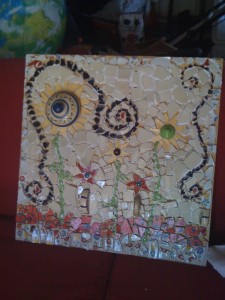 First, with the help of a one-armed little girl, I finished a mosaic art piece made from the shards of the many dishes and teapots I have accidentally broken over the years. (And by accidentally, I might mean thrown across the room in a PMS-induced fit.)

It’s called “Midnight in the Backyarden” and we’re very excited that it will be shown at this year’s “Gallery on 49th,” the annual art show hosted by the kidlets’ wonderful school, Charles Ellis Montessori Academy.

That very same day, I also finished my very first knitting project that didn’t look like I kicked a Muppet in the face and stole its lunch money. It’s a simple twine washcloth I started last week while Little Yenta Girl was in the hospital, and there’s no photo because she’s already playing “hair” with it in the bathtub.

And then, there was Sunday morning. Now, I must preface this by saying this next activity is extremely dangerous and should never, ever be attempted by anyone else and if you do decide to get dumb, you did NOT get the idea from me.

OK, here goes. Ever since I set foot in Congregation Mickve Israel 14-ish years ago, before El Yenta Man and I were even engaged, when my mother-in-law still had her wits and was the lead docent at the Temple and proudly led me through the Gothic sanctuary, I have been obsessed with the idea of climbing to the top of the bell tower.

As you can see, it is very, very far off the ground.

The yearning to climb sacred bell towers actually started when I traveled around Europe with my friend Amy after college and saw Notre Dame in Paris—I thought it would be supertough to sneak in and explore Quasimodo’s tragic path. Amy possessed more sagacity than I and pointed out that tourists are actually allowed into the bell tower, and what’s the fun in that? Thankfully, she also talked me out of speeding over on the train to Pamplona with the pair of steel-toed boots I’d shlepped around in my backpack, bless her.

Years later, standing in awe in the nave of my future husband’s childhood synagogue, a renewed zest to see the view from the highest point in a holy place overcame me. I peeked around the pipe organ balcony for an entry point while my future mother-in-law recounted the history of the stained glass windows but discovered nothing. I vowed that should it work out with this Savannah guy, I would one day find a way up to the tower that stood with its rounded keppe with the dozens of pointed church steeples in the Savannah sky.

Almost a decade and a half has gone by—our wedding, our move to Savannah from California, three years of teaching Sunday School in the building—all the while, the thought of climbing the tower fluttered like a moth around my dimly-lit brain. I would clamber up to the organ loft any chance I got. During Friday night services, I would turn around to wish the pew behind me “Good Shabbos” and my eyes would wander up, wondering how, how to get in.

Well, last year, I figured it out. I’m not going to reveal any specifics because I have too much respect for the synagogue administration and board and they’re probably already really mad at me. Let’s just say that what was hidden became clear.

I’ve been biding my time, waiting for the combination of wearing the correct outfit for stealth (this is not an undertaking for high-heeled boots) and opportunity (i.e., not during Yom Kippur services.) And last Sunday, when I was wearing sneakers and yoga pants and supposed to be helping make challah dough, I seized the day.

The first ladder was no big deal, except that it was kind of dark and I had to move a trapdoor with one hand. The next three were a different story. This was the second level of tower, light spilling in from the windows on the unfinished concrete. I was surprised that it wasn’t painted, though I guess it was never meant to be for the tourists like at Notre Dame. I looked up and saw a series of the rustiest, scariest wrought iron ladders that could have been excavated from Dostoevsky’s Russian prison.

I almost chickened out, big time. But that meshuggeh 22 year-old who really wanted to run with the bulls that summer kept whispering “C’mon, you can do this. You’ll feel like a douche for getting this far and not going to the top.”

Now, I’m not one to succumb to peer pressure, even from the voices in my head, but this felt truly important. Not just to have something to check off my badass list but to prove that I love this temple and its history, and this was a way to have an intimate connection with its story, a visceral experience that combines body, soul and spirit. Of course, baking challah with the rest of the Sisterhood is a wonderful visceral experience, too, but maybe I do need a little bit of badass factor. It’s also true that’s there’s a new rabbi and a new chief administrator in the synagogue’s near future, and should someone do a security sweep, I might never get another opportunity. I put hand over hand on the rusty rungs.

Someone had nailed a couple of 2’x4’s across one section, but I scaled them pretty easily. At the first landing, I made the mistake of looking down. I pictured my broken body on the wooden scaffolding and realized if I fell, no one knew where I was. My mangled corpse might not be found until some other moron had the same demented idea. But then I decided I was not going to die in ugly old yoga pants and kept on.

The second landing was bolted to the concrete wall under the pointed windows just like the other ladders, but for some reason, it WOBBLED. My intestines in my throat, I shook it a few times. Would it pull out from the wall under my weight? Surely it had been built to withstand someone bigger than me, generous tush and all. Then I started wondering why ladders had been built in the bell tower at all—as far as I could tell, there was no bell.

Above me, just one more orange-flaked ladder up, was another trapdoor. By now my arms were weak as egg noodles, my legs tensed from fear. I stood on the shaky landing for what seemed like a long time, talking to myself, talking to God, wondering what the right action would be. Did I climb all this way to fail? Was the attempt enough to be a part of the larger story of Savannah’s Jewish history? What the hell kind of mother and citizen does this anyway? What is wrong with me?

I put my hands on the rungs of this last ladder and took one step. Thirty seconds later, I took another. I made it to the top this way, slowly, and wrapped one arm around the iron to steady myself while I pushed up on the trapdoor with the other. Nothing. I couldn’t budge it an inch. It was too heavy for me to move with my adrenaline-depleted arms. I stood suspended in the air, breathing heavily with the top of my head touching the thick wooden slab. I’d made it to the finish line and couldn’t cross—perhaps a lesson to the insane person who lives inside me who should not be allowed to handle any decisions (or come to think of it, dishes.)

Suddenly, I pushed my head up. With the strength of my shoulders and the hardness of my skull, I lifted the door up three inches, giving me a raccoon mask-sized view. I felt the breeze immediately on my cheeks. I could hear children laughing in Monterey Square six stories below. I saw the Talmadge Bridge and the church steeples and the rooftops and the trees and the blue, blue sky.

If you had been a bird cruising the city’s highest points or flying by in one of the Army’s ubiquitous fighter jets, you might have caught a glimpse of the wide eyes a terrified but exhilarated almost-40 year-old woman who’d just pushed past her many demons to achieve a dream—a weird, inappropriate, probably illegal one, but a dream nonetheless. I whispered a prayer of thanks, and another for getting me back down safely, pretty please.

I made it back down in under ten minutes. I was just starting to creep down to the sanctuary when I heard my son’s voice. His Sunday School teacher had chosen this exact moment to bring the class in and quiz them on Saturday prayers. I flopped down to my belly like a Mossad agent—how would I explain THIS? My face pressed against the intricately-carved wood, I examined the six-winged angels along the columns from a whole new perspective and kvelled quietly as I heard my dear boy get all his answers right. I sent up another deep-hearted prayer of thanks that my children will never have to do another thing to belong to this synagogue and be a part of its story: They already are.

The fifth-graders finally marched out and I meandered back to the challah-braiding workshop. All in all, I had been gone less than a half an hour, and no one seemed to notice my absence. I jumped right in line with the other Jewish mothers and grandmothers and proceeded to make a total mess trying to braid six lines at once.

To anyone offended, I apologize and promise to never, ever to climb the bell tower again, and not just because my 40 year-old legs are still so sore. But I think I’d best get myself another pair of steel-toed boots and head to Pamplona before I’m 50, si?