Boo-YAH! The promised End of the World came and went and we’re all still here, ain’t we? But that doesn’t mean I wasn’t enraptured this weekend:

After dropping off the kinder for their last Shalom School of the year to practice for their tribute to Debbie Friedman, I decided to that I needed a walk to the river to clear my head of it’s “Not By Might” loop. On the way down Bull Street I ran into to the lovely JinHi Souci Rand of Muse Arts Warehouse and her husband, Mark, as well as a whole buncha fun folk from Act Up Savannah preparing for the Savannah arrival of the Westboro Baptist Church douchies at First Baptist Church on Chippewa Square.

Though I plan to get all Meshuggeneh JewMama on the WBC this Friday when they’re scheduled to spew their nonsense at Congregation Mickve Israel, I wasn’t gonna let the fact that I didn’t have a decent sign to wield stop me from joining the fun. I just stood next to cleverest ones, like “I skipped the Rapture for THIS??!” and “Savannah: The City Too Wasted To Hate.” Here’s my favorite, from fabulous local Ford Howell: 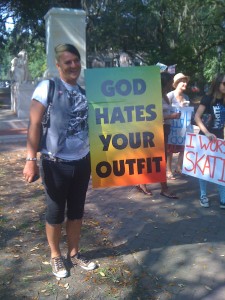 The crowd swelled to around 200 as Act Up organizers announced via megaphone the rules: No stepping off the curb. No throwing shit at THEM. No matter what THEY say, no doing anything that could give any reason for a lawsuit, ’cause that’s what THEY want. The police lined up along the square near the church and we all squished in. When murmurs began that THEY were on their way, the crowd—a multiethnic, multi-generational melting pot of rainbow capes, face piercings and smiles—was buzzing and laughing and ready for some major peaceful protest action.

I don’t know what we were expecting, but it was more than two backwater moms and a handful of inbred children.

Granted, Shirley Phelps is about as loud as they come—I had to admire her boundless enthusiasm for screaming her ridiculous rhetoric. But even her weird parody of Lady Gaga (revealing that she and her kinfolk actually listened to Lady Gaga enough times to impose their own lyrics on the music) was drowned out by random snippets of John Lennon’s “Give Peace A Chance” and shouts of “You’re idiots, go home.”

Mostly, we all stared at them, wondering what kind of mental illness inspired people to make people hand their children signs like this:

Personally, I was glad to be included—it would be so perturbing to be left out of WBC’s blanket hatred of all non-white, non-Christian (as IF Jesus woulda been down with them), non-homophobic (in addition to their #1 Hit sign “God Hates Fags,” another read “God Hates Fag Enablers”—I’m not really sure what that means but sign me up) residents of our very colorful, spiritual, sexual planet.

There was so much love on our side of the square that I had a totally bizarre thought: What if—and this is nuts, y’all—it’s all an act? What it Fred and Shirley Phelps and their (in reality, very small) following know that humans really only unify under oppressive circumstances and so launched the only kind of campaign that could bring all people together? When you witness such an encompassing rejection of so many groups of people, leaving only a handful of rather unintelligent, homely individuals, it becomes patently clear that any kind of racism, religious bias and/or discrimination based on sexuality or gender is completely asinine. So perhaps out of a deep love for humanity and a wish to see all of us operate from a common ground, the WBC has styled themselves the villains of tolerance and sanity. It’s possible, right?

Oh shit, that Kool-Aid must’ve been spiked or something.

The carnival went on for another hour, but I had to bail to listen to my happily-identified Jewish children sing this:

Not by might, not by power, but by spirit shall we all live in peace.

Good one to remember if the WBC manages to stick around until Friday.

4 thoughts on “A Close Encounter Of The Hateful Kind”