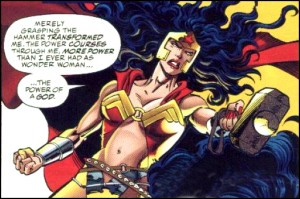 So listen, Sukkot starts Friday already. I know I said THIS was the year we were going to build a sukkah in the backyard, but it turns out I’ve already started my 5771 atonement list.

It just seems like an awful lot of WORK, y’all. I just got finished with dealing with dinner for ten before Yom Kippur and Rosh Hashanah before that and then there’s Shalom School lessons to prepare and JUST WHY IN THE HOOTENANNY DID GOD HAVE TO PUT SO MANY DURN HOLIDAYS SO CLOSE TOGETHER? Fortunately, we do a community Sukkot celebration down at the temple so I can go hang out there (and of course, we’ll be making graham cracker versions with the kidlets, as usual.)

If I were a religious Jew instead of, well, whatever kind I am, I don’t suppose I’d balk so much at all the shopping and preparing and cleaning that each ritual requires. It’s always seemed to me that when it comes to observant Jewish practices, it’s up to the women to make sure it all gets done while the dudes just get to show up and pray and eat. And then I gotta BUILD something? That just doesn’t seem fair to this lazy, cranky lady right now.

As it turns out, the actual building is actually the man’s job. Elana Sztokman’s blog in today’s Forward, “Sukkot Customs I’d Like To Change” points out that’s pretty whack, too:

As a woman, though, I find Sukkot to be one of the most difficult holidays we’ve got. It is laden with messages about gender differences and where women truly belong, and these messages seem to intensify each year…I used to think it was just the children’s books – you know, pictures of men and boys banging the hammer and nails juxtaposed against pictures of women and girls in aprons or serving soup – which conveyed these messages.

I don’t know if Sztokman calls herself a feminist or not, but I always appreciate how observant Jewish women reconcile feminist principles:

The message of Sukkot should be an equalizing one. We are all stuck in the huts, all equally exposed to the elements. Living in the desert, no one family had a bigger house, job, or paycheck and everyone relied on God’s generosity and compassion.

I agree. But somehow, even as a loud, proud liberal feminist, I don’t feel a smidge of guilt that El Yenta Man is the one down at the synagogue hammering together a sukkah and I’m lounging in the empty expanse of grass in the backyard! Like I said, it’s only been two days and my sin list is already growing…