Look, Moses had a stutter and Aaron was busy having bells sewn on his robes, so who do you think really kept it together during the exodus from Egypt?

Miriam, that’s who. (That would be Moses’ and Aaron’s older sister, not the Mexican transsexual entertainer, for those unfamiliar with the haggadah.)

She was clever enough to reunite Moses with his mother to nurse after the pharoah’s daughter pulled him out of the bulrushes. She was a prophetess whose faith that God would deliver the Jews across the sea was so strong she thought to pack tambourines to celebrate once they were safely on the other side. And while everyone was wandering around parched in the desert, she always knew where the water was. Isn’t it about time paying honor to her is a part of everyone’s seder?

Ever since I heard my feminist cantor cousin Michal Matter sing Debbie Friedman’s completely rockin’ Miriam’s Song, we’ve had a goblet of fresh, cool water on the table. Sometime after the second cup of wine and the night seems impossibly long, I think of Miriam’s peaceful strength and unending patience — can you imagine the kvetching she must’ve endured?

The addition of Miriam’s Cup to the other symbolic items of the seder is a fairly new tradition, but it’s an essential one. Risa Borsykowsky provides some wonderful background in her article at JewishGiftPlace.com — read it and enter the contest to win this gorgeous silver kos Miriam by artist Emily Rosenfeld.

The ritual of Miriam’s cup might not be in the haggadah, but you can create your own follow this one. You can incorporate it right after someone goes to the door to let Elijah tip his yarmulke and it’s a nice opportunity to pay homage to all the Jewish women whose stories somehow got left out of history. 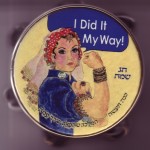 Another way I like to honor Miriam is breaking out the tambourines and dancing around the table, which totally freaks the older generation out. Little Yenta Girl loves this part, and I think she deserves her very own tambourine, either this Rosie-the-Riveter fabulousness from Kavanahcards.com or artist Betsy Platkin Teutsch’s “Moon Sailor” featured in the current Jewish Woman International. Banging tambourines during “Dayenu” is lots of fun, too, but sometimes certain grandparents get grumpy and yell about this.

And of course, there’s Debbie Friendman’s song. Did you listen yet? Here are the lyrics so you can sing along and shake it like ya mean it — it starts with the chorus:

And the women dancing with their timbrels
Followed Miriam as she sang her song
Sing a song to the One whom we’ve exalted.
Miriam and the women danced and danced
the whole night long.

And Miriam was a weaver of unique variety.
The tapestry she wove was one which sang our history.
With every thread and every strand
she crafted her delight.
A woman touched with spirit, she dances
toward the light.

As Miriam stood upon the shores and gazed across the sea,
The wonder of this miracle she soon came to believe.
Whoever thought the sea would part with an outstretched hand,
And we would pass to freedom, and march to the promised land.

And Miriam the Prophet took her timbrel in her hand,
And all the women followed her just as she had planned.
And Miriam raised her voice with song.
She sang with praise and might,
We’ve just lived through a miracle, we’re going to dance tonight!

And the women dancing with their timbrels
Followed Miriam as she sang her song
Sing a song to the One whom we’ve exalted.
Miriam and the women danced and danced
the whole night long.

Now go out and make some noise for Miriam!