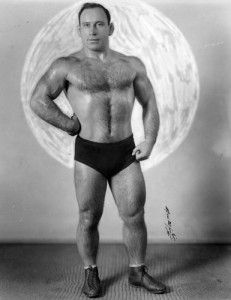 Loved this article in the always-thoughtful Tablet by Eddy Portnoy about the silliness of the stereotype that our kind are weaklings.

Portnoy points out that as a people, Jewish bodies aren’t any less athletic or strong than any other group when taken as a whole, yet the image of the big-brained, spaghetti-armed nebbish endures, “forcing Jews who hope to counter such stereotypes to create odd publications such as encyclopedias of Jews in sports and other books and pamphlets designed to salve the wounds of a people allegedly doomed to physical ineptitude.”

The reality is that history contains a terrific showcase of Jewish asskickers. Maybe Portnoy consider the slideshow he put together to accompany his own piece as odd, but I found it fabulous. Read this anecdote of Polish-born, 5’3″, 200-lb. wrestler Abie Coleman (posing as the “Hebrew Hercules” above), reported to have invented the dropkick after watching kangaroos maul each other in Australia:

n 1985, at the age of 80, Abie was walking home from the Torat Emet Jewish Center in Queens when he was mugged by two youths. This was a poor choice in victims. Abie beat the two of them badly and left them bleeding on the sidewalk. Abie Coleman died in 2007 at the age of 101.

May I also offer the very current example of Orthodox boxer Dmitriy Salita, who reigns undefeated in the WBA’s junior welterweight division.

And of course, there is my favorite manifestation of Jewish athleticism and speed: The JEA Fire Ants, who took the win over St. James last night and are coached by the one and only El Yenta Man. Now, I ain’t sayin’ that we beat Jesus or anything, but the other teams in the 12 and Under Celtic League had better think twice about messing with the tzitzit, ‘aight? 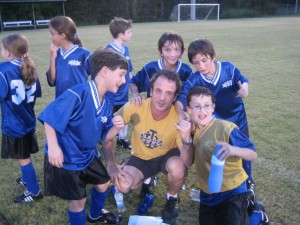 One thought on “Who You Callin’ Nebbish?”