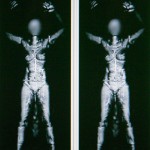 Have any of you had the pleasure of being screened in the naked machine at airport security? I did a few weeks back on our way to San Francisco from the Jacksonville airport; the little booth reminded me of something at a hi-tech spa. The whole thing wasn’t so bad, although it would have been nicer if the process included a free spray tan.

I’m not a particularly modest lady, having logged plenty of afternoons in the nudey section of Muir Beach in my 20s as well as also having given birth in a room full of curious med students. I don’t really care if the person checking my electronic image for dangerous materials took a nice long gander at my fillings and the copper IUD hanging out in my Fallopian tubes.

However, apparently I was deemed extra suspicious that day because I also got my boobs patted down by a female TSA officer and that’s when I started thinking there really has to be a better way to protect the skies from shoe bombers and underpants terrorists. Wouldn’t it just be easier to ask me, point blank, if I planned to blow up the plane today? If my eyes got shifty and I started to sweat, then it might be prudent to take me aside and start touching me, but being felt up, in public, in front of my children, made me think we’re already living in a police state where any of us could be denied due process in a flash.

All week long people have spouted on about how the scanners and patdowns are “a necessary evil” of the times in which we live, while others are revolting against the breach in privacy and civil rights. CBSNews posted today that nobody even knows if the scanners even work since the information is highly classified. It’ll be interesting to see what kind of clusterf*ck ensues next week as the entire country crisscrosses itself in order to eat turkey with their loved ones.

We Americans talk so tough about our rights to own guns and vote in morons to Congress—why are we so willing to give up the right to be treated with dignity in the name of fear? Yet another mystifying paradox.

You know who’s watching all this nonsense and shaking their heads? The Israelis. This Toronto Star interview with Rafi Sela, who set up Tel Aviv International Airport’s highly efficient, six-tiered security system that keeps passengers moving and the bad guys out, is a must-read—especially the part about what would actually happen if a bomb was discovered in any major American airport and the entire place had to be evacuated.

The brunt of Israeli airport (and other types of) security relies on the individual screeners’ willingness to look a person in the eye and discern whether he or she is acting suspicious—none of this American faux-politeness (“Sir, please step to the side and submit to a search…”) Somehow as Americans we’ve come to believe that this “behavioral profiling” is discriminatory, when it so many cases it is a poisonous form of political correctness. According to Sela, Umar Farouk Abdulmutallab and his exploding underwear would have never found his way onto a plane last Christmas if he’d gone through Israel.

“Israelification” shows us what we lack when it comes to vetting out possibly security threats from massive crowds: Balls. The very junk that John Tyner didn’t want that government TSA agent touching.

6 thoughts on “The Three “I’s of Airport Security: Israelification, Intelligence And Eye Contact”