Got an interesting press release today about a new exhibit at NYC’s Yeshiva Museum:

Threshold to the Sacred: The Ark Door of Cairo’s Ben Ezra Synagogue centers around the intricately carved wood panel that formed part of the door to the ark that held the Torah scrolls in the ancient synagogue of Old Cairo around the 11th century.

Jointly owned by the Yeshiva museum and the Walters Art Museum in Baltimore, this “doorway” to an Islamic-friendly Jewish past was discovered at a Florida garage sale in the early 1990s. But that isn’t even the coolest trash-to-treasure element of the exhibit: The Ben Ezra Synagogue is the site of the Cairo Genizah, a massive trove of forgotten documents found in 1896 that revealed all kinds of information about Jewish life in the Middle East.

According to Jewish law, any piece of writing that contains the name of God in Hebrew cannot ever be thrown away, and a genizah is literally a “hiding place” for the worn-out books and other synagogue stuff taking up space. Think of it as sacred hoarding.

Maimondes – aka the Rambam – had impeccable penmanship, of course.

Back in the 1000s and 1100s, old Jews dumped not only prayer-related parchment in the empty spot behind the wall, but also grocery lists, school primers, letters written by Maimonides‘ own hand and the only known Hebrew version of the Book of Wisdom, also known as the section of the Christian canon Ecclesiastes.

Many of these will be on display for the exhibit along with one of the oldest surviving Haggadahs, a letter written by poet doctor Judah Halevi and a rare 16th–century navigational chart of the Mediterranean by the Jewish cartographer, Judah Abenzara.

What’s blowing my mind is that I had never heard of the Cairo Genizah until I read Dara Horn’s new novel, Guide for the Perplexed. The tale of a software mogul who disappears in Egypt, this tight intellectual mystery uses the same genizah as a plot keystone and as a metaphor to explore how we curate the past.

The Washington Post calls the book “overdone,” but for Jewish nerds like myself, it’s absolutely riveting. I just finished it last week, and today I find out about a whole museum full of genuine genizah artifacts? That’s some crazy Kabbalah mystic mind melding right there. 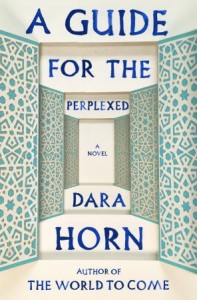 Horn, author of my all-time faves The World to Come and the Southern Jewish epic All Other Nights, has a tremendous talent for layering all kinds of historical wisdom into her fast-paced fiction. She has a knack for combining the secular with the scholarly, and Guide for the Perplexed blooms with biblical and Talmudic references both overt and oblique.

I hope El Yenta Man and I get a chance to visit the Yeshiva Museum in the spring – he just loves it when I shlep him to look at dusty old grocery lists.

And yes, I did mention a second Jewishy coincidence – this one’s a little more modern and hits closer to home, so stay tuned!