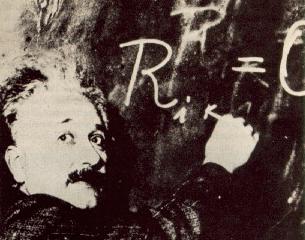 A self-described “Scots-Irish Gentile from Iowa” explores the elevated average Jewish IQ and how it got that way in this month’s Commentary magazine. Understandably, we all get a little nervous when someone starts tooting our horns, mostly because spotlighting how Jews stand apart from everyone else can easily lead to some accusation of us actually having horns.

Charles Murray is honestly curious as to why there is an “extravagant overrepresentation of Jews, relative to their numbers, in the top ranks of the arts, sciences, law, medicine, finance, entrepreneurship, and the media,” and delves into some original scholarly theories. Naturally, the crazy number of Nobel prizes awarded to Jews when compared to the rest of the world’s population is a good place to start:

“In the second half of the 20th century, when Nobel Prizes began to be awarded to people from all over the world, that figure rose to 29 percent. So far, in the 21st century, it has been 32 percent. Jews constitute about two-tenths of one percent of the worlds population. You do the math.”

But when he starts going backwards, things really get interesting. Debunking the usual theories that only the smartest Jews survived all the pogroms of history and that we consciously kept intelligence in the gene pool, the gentile from Iowa shows us that these explanations can’t be held up as scientific:

Two potential explanations for a Jewish gene pool favoring high intelligence are so obvious that many people assume they must be true: winnowing by persecution (only the smartest Jews either survived or remained Jews) and marrying for brains (scholars and children of scholars were socially desirable spouses)…But once the Cossacks are sweeping through town, the kind of intelligence that leads to business success or rabbinical acumen is no help at all. On the contrary, the most successful people could easily have become the most likely to be killed, by virtue of being more visible and the targets of greater envy. Furthermore, other groups, such as the Gypsies, have been persecuted for centuries without developing elevated intelligence. Considered closely, the winnowing-by-persecution logic is not as compelling as it may first appear.

As for the marrying-for-brains theory, “arguments have been advanced that rich merchants were in fact often reluctant to entrust their daughters to penniless and unworldly scholars. Nor is it clear that the fertility rate of scholars, or their numbers, were high enough to account for a major effect on intelligence.”

Murray goes on to take us into the intellectual differences between Ashkenazim and Sephardim, and suggests that it is the Torah itself and its required literacy and higher thinking that pushed up the IQ points:

Since worship of God involved not only prayer but study, all Jewish males had to read if they were to practice their faithand not only read in private but be able to read aloud in the presence of others…I suggest that the Jews who fell away from Judaism from the 1st to 6th centuries C.E. were heavily concentrated among those who could not learn to read well enough to be good Jewsmeaning those from the lower half of the intelligence distribution.

The whole article gets a little dry a times, but it’s an important read. Surely, having been published in a Jewish journal of higher intelligence presents these theories as innoucous, merely historical and explanatory. But if the same article was published somewhere less friendly, say some White Power site or the San Francisco Chronicle, this discussion of the “superiority” of Jewish DNA would make our skin crawl, right?

*It’s a tune. Been listening to a lot of Grateful Dead lately.

2 thoughts on “That’s Right, The Jews Are Smarter*”