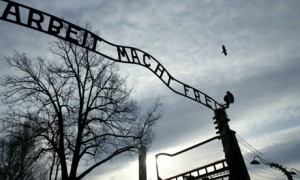 Poland declared a state of emergency on Friday after the bronze “Arbeit Macht Frei” sign arcing above the site of the former concentration camp Auschwitz-Birkenau was wrenched from its hinges and stolen. Today, the BBC reports that the sign has been recovered and that five men are being questioned for the crime.

The sign, meaning “Work Sets You Free,” was cast by camp prisoners, offered a cruel, ironic welcome to new inmates during Hitler’s grip on Eastern Europe, and has stood ever since as a testament to the hideous acts committed beyond the gates. The theft caused international outrage, and a collective global sigh could be heard when the announcement that the sign had been recovered, albeit it three separate pieces.

Polish police say the perps they arrested aren’t members of some neo-Nazi group or political idealists looking for cheap decor to match their Stalin posters in their post-Socialist lair. Nope, the authorities now think the theft was financially motivated. Um, really? There’s nothing better to steal in Poland than an unwieldly wrought iron sign that’s going to spark the ire of the Mossad? Dumbkopfs.