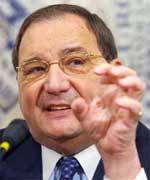 Y’all know I love the Anti-Defamation League’s Abe Foxman. He and his squadron of righteous folk are always just so on it when some dipshit celebrity slips an anti-Jewish slur into conversation or Nazi graffiti appears at the local junior high. I sleep better at night knowing that if anyone ever gives me or my family a single ounce of guff about being Jewish, I can sic the ADL on their asses (and if their strong words don’t work, there’s always the stronger methods of the JDL.)

But I have a bone to pick with Mr. Foxy. It seems he was instrumental in helping ban Valley of Wolves, a hideously violent Turkish film starring American actors that was supposed to screen in Los Angeles and San Francisco this week. Heavy on the anti-American and Jew-hating sentiments, the movie stars the always creepy Billy Zane as a crazy Christian soldier with a penchant for killing Iraqi civilians and the ever-disturbing Gary Busey as a Jewish doctor who’s running an organ farm out of Abu Ghraib.

Unlikely to cut into the profits of The Santa Clause 2. Probably nothing you or anyone you know would put on their Netflix list, although you can bet Mahmoud Ahmadinejads propping his feet up with a big bowl of popcorn just about now. Certainly not something you’d want to show a group of rabid skinheads jacked up on meth. But squashing its piddly three-theater release? C’mon, Abe! You have enough media savvy to know that making something verboten is to make it wildly attractive.

Remember the last time you came out against a film  that dumb little Jesus movie? Well, friend, it went on to become one of the biggest grossing films in history. Learn, Foxy, learn: If you don’t want anyone to see a film, send out one of your fabulous press releases about how though you may not agree with its message, you support the right of American citizens to see it.

Listen, I can’t even get it together to go see Borat, so you know I’d never find my way into a theater to see this piece of crap. But isn’t better to let people sit through it, be repulsed and at the very worst, have it become a jokey cult classic than to give it power by roiling up yet another ADL media storm? Be a clever fox, Abe  not the boy who cried wolf.

Speaking of Borat, the anticipation of LMAO really is killing me (I’m springing for a babysitter for El Yenta Man’s birthday next week) but this ouchy satire-on-satire column from the New Yorker has put some pucker in the chuckle.