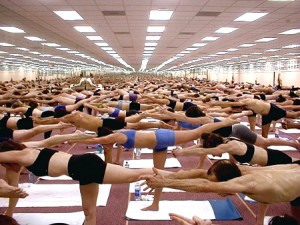 I recently survived my 36th Bikram yoga class — and if you know Bikram, you understand that this is an accomplishment.

If you don’t know Bikram, it’s a form of Hatha yoga practiced in a room hot enough to cook eggs, or at least brew tea. There’s a lot of sweating involved, and not much of the quiet serenity you expect from yoga class. As I wrote about in this month’s South magazine, instead of inner peace, sometimes what arises within is more akin to murderous rage.

But I don’t go to Bikram several times a week because it’s fun—I go because it works. I’ve been managing chronic pain for over a decade now, and I’d drink camel pee if I thought it’d bring relief. I’ve tried every treatment imaginable, from chiropractic to acupuncture to big doses of turmeric (proven to be a natural inflammatory) to promising El Yenta Man all manner of sexual favors if he’ll rub my hip for hours on end. While these have all worked to a degree (especially the latter, heheheh), the effects are temporary.

Yet after three and a half months of bending my body into crazy shapes and contracting muscles I didn’t know existed, I feel better. Like, way better. The pain hasn’t disappeared completely, but it’s been tamed, like a tiger that’s been given some Xanax-laced catnip. I’m sure it has something to do with the fact that I’m the one exerting the effort into the hard, painful places rather than being manipulated by a practitioner—perhaps because I am finally playing an active role in healing my pain instead of passively laying on a treatment table, it’s all the more powerful.

(This does not discount all the wonderful, talented healers who have helped me over the years. Except for that chiropractor in Corte Madera who told me I had scoliosis and then charged me $800 to lay on a machine that pulled my body in opposite directions—he can kiss my sweaty tush.)

Anyway, the fact that I’ve surpassed class #36 is significant. The kabbalistically-minded among us imbue meaning into digits: 18 traditionally means chai — “life” — in Judaic numerology and is considered the luckiest of numbers. (That’s why tzedakeh (charity) and gifts tend to be given in increments of $18.)

So “36” is “double chai” – double life. While walking home from class, sweat dripping in my eyes and my legs feeling like noodles, it struck me that I’d attended this many sessions, and I realized that practicing Bikram yoga has given me my life back.

Sounds corny, I’m sure. But I’m so grateful to be out of pain that I’m willing to take on the slings and arrows shot towards weirdos who wax poetic about yoga. And listen, I’m not saying Bikram is for everyone—I just thank God it’s for me.

Read “The South’s Guide to Breaking A Sweat” here.

4 thoughts on “Shvitzin’ My Prayers”