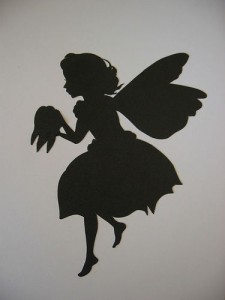 So Yenta boy has found out the Tooth Fairy is not actually a magical creature with a fetish for pieces of little white enamel and a white puff of hair who writes in rhyming couplets.

I know, it was inevitable. He’s NINE, for heaven’s sake, and like President Obama says, it’s time to leave behind childish things. But our Tooth Fairy is special. Ever since that very first tiny tooth fell from our baby’s pink gums, El Yenta Man and I have poured our hearts into the myth, staying up late composing notes and inking delicate little drawings sprinkled with glittery powder, weaving a world of fairies and mystery that captivated our son’s imagination. Not to mention his financial prowess; he figured out he’s still got about $20-30 bucks coming by the time all his milk teeth go (sometimes the Tooth Fairy leaves $5 because she doesn’t always carry change, ‘aight?)

It all unraveled so unexpectedly. EYT and I were cooking when Little Yenta Girl sashayed into the kitchen with a little rhyming note of her own, complete with ink drawing. “Look what I found under my pillow!” she squealed.

“Did you do this?” EYT mouthed to me over her head.

I rolled my eyes. She’s still a year away from losing teeth, and I don’t have time for trial tooth fairy runs. Her brother stood in the doorway, looking innocent. I knew immediately that he had created the note for his sister so she could participate in the magical world of fairies, but EYT was not so sharp, insisting in front of the children that it had to have been my work because it was such a perfect match to the notes we wrote our son. I shushed him and we dropped it until dinner was over and we had sent the children to the bathtub.

“So, you really didn’t write it,” EYT asked for the fifth time. “But that means he did it. Which means he’s on to us…”

Just then the little scribe came to the table wrapped in towel, skin flushed and smelling like lavender. Looking back towards the bathroom, he whispered, “So, do think she suspects anything?”

No, we said. He’d done a great job imitating his Tooth Fairy. He stood there for a second, hair dripping.

El Yenta Man and I exchanged a whole conversation in one long look: Do we tell him? We can’t lie. But he believes it so much. God, parenting is hard.

His face crumpled and the tears came. He crawled into my lap, his precious little heart breaking. I cried, El Yenta Man cried, mourning the bridge we’d just crossed, the first of so many disappointments and disillusions life will bring.

I held him close and whispered that I still believe in fairies, that every flower, dragonfly, butterfly and hummingbird is magical. That there is evidence of glittering, otherwordly beauty everywhere we look, and that no matter how many times we see through things we used to believe in, there is always an unchanging source of creation and power where we can put our faith. I asked him to please keep the Tooth Fairy story alive for his sister, and his eyes sparkled when I asked him to help us create her notes when the time came. He sniffed, and agreed. “Will you still leave notes for me anyway until I lose all my teeth?” he asked into my ear.

Of course, babydoll. Anything to stoke the magic of your mind and heart.

Then he cocked his head. “You know how Santa leaves a new DVD near the TV on Christmas so you and Daddy can sleep in? Is that you, too?”

I pshhhhhed. “Don’t be ridiculous, son. We’re Jewish. How could we possibly be Santa?”

He pondered this for a second. Then he said brightly, “That makes sense. Love you!” and bounded into his room to finish the last chapter of his dragon book.

So the Tooth Fairy isn’t always honest. The kid’ll have to sort it out in therapy later.

3 thoughts on “RIP: The Tooth Fairy”