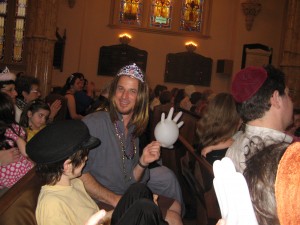 So, listen up, kidlets, here’s my Purim shpiel:

Once upon a time in a borough called Shushan, there was this pervy king named Ahasuerus who wanted his queen, Vashti, to dance naked for him and all his gross friends. Vashti did right by her momma, and was all, “I don’t think so — I was not raised on the pole, thank you” so King Ass “deposed” her. Maybe that means he killed her, maybe he sent her back to her mom, we don’t know. But we do know that he went looking for a new queen, and found a lady so pretty he didn’t even care that she was from the other side of the camel’s tracks.

This lady, Esther, was a nice Jewish girl and didn’t just have smokin’ looks, she had smarts, too. She got her uncle Mordecai are good job at the palace after he foiled an attempt to kill the king, but Mordecai pissed off one of the kingdom’s most important advisors, a very bad man named Haman who had silly taste in hatwear. Haman decided to punish Mordecai by devising a plan to wipe all the Jews off the map of Persia, which totally freaked everyone out — except Esther. She stayed calm and informed her husband that if he listened to this douchebag, she’d have to hang at the gallows, too. The king rightly deduced that evil politicians are far easier to replace than wives who will put up with his bullsh*t, so he ordered Haman to be hanged in the very noose meant for Mordecai.

And then all the Jews lived happily ever after, or until the next pogrom. (What, you’re looking for something a little more educational? Then go here. Or here. But not here.)

Now we party. ‘Cause even though this megillah isn’t in the Torah and doesn’t mention any Divine influences, we are obligated by the rabbis as good (I mean, bad, BAD!) Jews to “drink until we do not know the difference between ‘cursed be Haman’ and ‘blessed be Mordechai.'” There you have it — a Talmudic edict to get sh*tfaced. (I know my friend Uber Shiksa Chick is gonna go hogwild on this.)

Anyone who’s witnessed El Yenta Man and I dressed as Queen Vashti and Bad Haman (respectively) handing a flask back and forth over the synagogue pews know that the Yenta household takes Purim very seriously. The Wild Turkey has already been poured to bring to Sunday morning services, but I assure the parents of my Shalom Schoolers that I will not be breaking it out until I safely return your children to you. After that, I take no responsibility for my actions and may have to be peeled off the bima while performing a blistering rap that combines the lyrics of Lady Gaga and “Shalom Aleichem.”

Other Purim traditions involve delivering mishloach manot (bags of treats similar to Easter baskets except Jews hate pastels) and performing practical jokes. Do you think egging my in-laws’ house could count as both?

One thought on “Pour ‘Em If You Got ‘Em”