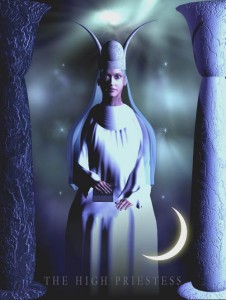 Last week on Tablet, Jeremy Gillick wrote a piece about the kohanot, or Hebrew Priestess movement:

This notion of reinventing tradition to create something new and based in (what I, and apparently others, believe is) the original worship of our Creator fills me with a vim and vigor to jolt me out of an afternoon Yom Kippur service nap. While I don’t know if I’d ever call myself a Jewitch (though I am intrigued by the term and could be convinced, especially if broom-riding is part of the deal), bringing back the Goddess to shul is something I can get behind.

Obviously, pitching such an idea to mainstream Jews has a looooong way to go, even though Rabbi Gershon Winkler, a former ultra-Orthodox rabbi, argues that Judaism was originally closer to Native American Shamanism than to Christianity–’cause you’re always gonna have your yeshiva-stalwart Rabbi Moshe Tendlers, who snort that earth-based Jews are “perverts” who should be ignored.

Anyone want to meet me in the woods for Rosh Hashanah?

Even if you’re not ready to break out the Stevie Nicks goddesswear just yet, read the article and let me know your thoughts.