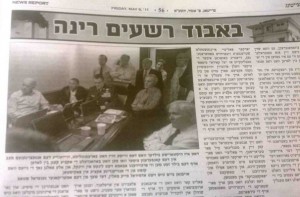 Ah, such historical drama captured in this moment! As our Navy Seals closed in on Osama Bin Laden with Mossad-like stealth, our President, Vice-President and Secretary of State waited with bated breath and white knuckles—wait a minute.

Something’s missing from this photo published in Brooklyn-based Chasidic newspaper Der Tzitung…um, where the f is Hillary? You know, America’s most powerful diplomat? The skilled political influence that keeps China off our backs, Africa in our consciousness and Iran where we can see them? That lady?

Oh, well, you know women. Maybe she needed to go change her tampon during modern America’s most important moment.

Yeah, I’m a little outraged at Der Tzitung‘s FrankenPhotoshopping of the women out of the Situation Room (another Security Team officer, Audrey Tomason, was erased as well.) I understand that ultra-Orthodox Judaism does not allow pictures of women in their newspapers. Neither are women permitted to sing in public, show their hair to anyone but their husbands or touch any man who’s not an immediate family member. This community observes a strict level of modesty (known as tznuit) and has a hard time convincing outsiders that these measures are ways to venerate women, not keep them down. While it’s tempting to draw parallels with the Muslim reasoning for shrouding women in burkas, I do believe the root of tznuit is respect for the Feminine—however misguided, inconvenient and irrational it may seem to the rest of us.

However, as Failed Messiah (the blog that broke this story first, followed by the biggies) points out, “There is no Jewish law mandating the removal of normally clothed women from pictures like this.”

As media crimes against women go, this one ranks pretty high, though it definitely gets lost in the sea of airbrushed boobs and such. Women are Photoshopped every day—a slimmer hip here, a mutant elbow there—one disappearing altogether is hardly the worst thing that ever happened to feminism on a computer.

No, stab in the heart of this is the editors’ assumption of the right to change up a defining, universal moment to conform to their beliefs. As Jews, surely the danger of revising history supercedes such “fauxtography” (thanks, Rabbi Jason Miller, for the term.) I may be a heathen Jew with a bellybutton ring and Victoria’s Secret catalogs all over my house, but I’m pretty sure God does not want us to LIE.

Some have proferred that the editors of Der Tzitung removed Hillary because they’re uncomfortable with women in positions in power, but I think it was just the stupid mistake of some dumbkoff who should have to work in his uncle’s butcher shop in Flatbush for the rest of his career. If you don’t want the readers of your yiddishe borough newspaper to look at a woman, especially ones as incredibly awesome and powerful and sexy as Hillary Clinton, then publish something more benign, like Joe Biden talking with food in his mouth.

Here’s how it really went down, featuring Hillary in her full gasping glory: 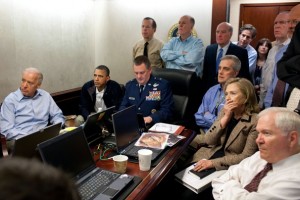 6 thoughts on “No One Puts Hillary In A Corner. Or Makes Her Invisible.”