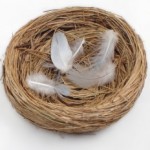 No bickering. No interrupting. No one using my bathroom mirror to style his purple hair and no one kvetching about how walking the dog is an unreasonable chore.

I expected this vacuum of sound after we dropped both children at sleepaway camp yesterday.The build-up to that moment — frantic weeks of packing and stamping their underpants with their names and debating whether they actually needed two toothbrushes or could get away with one — was only devoid of beatings because it contained the promise of ten whole days of silence.

Looking forward to this block of peace, I handled the complete neurotic chaos of several sets of Jewish parents helping their 8 year-old daughters unpack in a 20’x20′ cabin quite well, although I may have had to get all Mama Grizzly at a dad who tried to muscle in on all the shelving. (Dude, there are THREE shelves alloted per person so get your freakin’ Hannah Montana towels OUTTA my kid’s territory before I show claws, k’?)

Knowing I would have hours upon hours of calm in the next week and half, it didn’t even bother me that El Yenta Man ordered the treyf-iest item on the menu while at dinner with the kosher-keeping parents of Yenta Boy’s friends the night before camp. (EYM chastised himself, afraid that he might have embarrassed our son, who turned out to have also ordered the bangers and mash. The other parents just shrugged and ate their shrimp cocktail.)

After we met everyone’s counselors and gave a last family squeezy sandwich hug, we tried not to sprint with glee to the car. I’ll miss my monkeys, especially my baby girl, but seeing as she was already engrossed in a game of Go Fish with her bunkmate I think she’s going to be plenty occupied. I’m pretty sure we left skid marks when we left.

So the shmo who wrote the blog post “Sleepaway Camp is a Dumb Idea – Unless You Hate Your Kids” can suck it: I love my kids, I loved camp – especially Jewish camp – and I’m so happy my kids get to make friends with people from all over the world and learn songs and enjoy a little time where making massive amounts of noise is encouraged. And yes, Helicopter Blogger Dad, it never hurt anyone’s marriage to have a little break from the kids.

Except it turns out a quiet house might be more nerve-wracking than a full one.

“This is weird,” whispered El Yenta Man last night while we were eating a dinner of champagne and cut-up cucumber and potstickers from Trader Joe’s. (See that? No main course. PARENTS ON THE LOOSE.)

“Totally,” I whispered back, distracted by sort of background thumping and squalling with occasional snippets of 80s music. “Do you hear that, though?”

“No, not that…What is that noise?!” I jumped up and checked the fan. Nothing. TV? Off. The AC? Its usual low hum.

That’s when I realized: Oh my gawd. I can actually hear myself think.

3 thoughts on “Nesting on Empty”