Oh goody goody goody, I’ve always wanted to be memed but I’ve never been cool enough until now. Does it matter that I had to invite myself onto Amy Guth’s Chanukah Blog Tour and then only skated in at the very last minute? He-ell, no! There’s still wax left in them thar candles and I’m thrilled to be a part of it all!

Amy is currently shilling for her book Three Fallen Women (Hey! She even stopped in at The Sentient Bean on her book tour, the only spot in Savannah serving free trade coffee and poetry slams!) and is a self-proclaimed anal-retentive vegetarian cat lover who apparently likes wacko hair color as much as I do. She’s posed these same questions to 35 other Jbloggers, some familiar, some new to me, all dishing their personal flavor of Jewishy goodness. So here goes:

1. Quick! You must turn a plate of latkes into an upscale gourmet delight
(as if they aren’t already?). What would you add to them to dress them up,
flavor and/or garnish them?
Um, I’m still recovering from the epic latke extravaganza in my son’s first grade classroom, so I’m not really ready to think about this. Oy, you should see the blisters. Sizzling oil in a frying pan plugged in next to the pencil sharpener at a desk made for midgets  the miracle is that no children were maimed. However, on night #1 I did make a heavenly batch of zucchini-carrot latkes, and next year there will definitely be sweet potato delights drizzled in truffle oil on the table. I also suspect green Tabasco atop sour cream would be tasty, but that ain’t “upscale gourmet,” even down South.

2. What is the dumbest thing you’ve ever heard anyone say about Chanukah?
The culturally-challenged neighbor kid this week who kept asking “Where’s the black candle?” I know, I should be more tolerant, but somebody please, send money to the Georgia public school system.

3. What’s the best possible use for olive oil?
I never would have said this until yesterday, but it’s a damn good salve for blisters caused by compulsive latke frying.

4. Settle it once and for all. Latkes or hammentaschen? Which to you prefer? What about pitting the winner of that contest against sufganiyot?
Do folks know that this is actually a semi-serious debate that takes place at prestigious universities?

Latkes will always be the popular choice since it is a rare hammentaschen that doesn’t turn to sawdust in one’s mouth, but made right with that crazy poppyseed filling takes me back to my first crush, a boy named Jeff Seaman who always dressed like Haman on Purim and kicked me in the shins. But even three-pointed buttery divinity cannot stand up to the Southern Jewish sufganiyot: the raspberry-filled Krispy Kreme. Yup, they’re kosher!

5. What’s the best way to mix up a game of dreidel?
Drill a hole and pack in a few Mexican jumping beans.

6. My novel, Three Fallen Women, shockingly enough, is about the lives of
three women. Which three women would you like to have over this year for latkes and why?
Wha’, I gotta shred more gawdamn potatoes? Like I can’t order Thai takeout and just enjoy the conversation with my homegirls?

Tania Katan, author of My One Night Stand With Cancer, because she’s a totally hilarious person and I hardly ever get to hang out with her.

Mary, mother of Jesus, just so I could ask her over the third glass of pinot, “C’mon, honey, ‘fess up. Who’s really the father?”

And while I’m cooking more of these f*ckin’ pancakes, I’d invite Ms. Guth herself, ’cause she seems pretty cool and we could compare Manic Panic collections. Look, here she is:

A fair resemblance to the visage at the top of this page, donctha think? The genes never fall far from the shtetl…

7. Other than Three Fallen Women (har har), what book do you think would make a great Chanukah gift this year? What book would you like to receive as a gift this year? 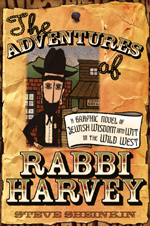 The dry humor and Talmudic wisdom of Steve Sheinkin’s The Adventures of Rabbi Harvey is guaranteed to make any Jew giggle; I was so glad to be able to give it my brother-in-law instead of the ugly sweater I figured I’d have to resort to. I’d love to receive a small siddur with tranliterations, a big book of feng shui and  since I’m a fiction slut  Three Fallen Women (c’mon, isn’t promotion partly the point of this exercise, Amy? 😉 )

8. What bloggers didn’t participate in Chanukah Blog Tour 5767 and you
think should have? We can always get them to play next year!
I can’t believe Esther of My Urban Kvetch isn’t here  this is, like, so her. And Amishav of Chai Expectations would tear it up! Jewish Blogmeister has been working his heinie off interviewing other bloggers, so it’d be interesting to turn the tables.

Thanks to Not Chosen, Just Posin’ and the lovely Orienyenta for mentioning me in their answers.

5 thoughts on “Last, But Not Least On The Chanukah Blog Tour”